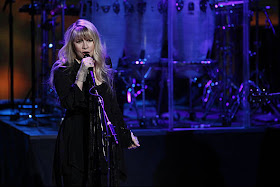 High excitement at America’s Got Talent as the legendary Stevie Nicks performed live on the show.

You can always tell when a proper star’s in the building by a) the size of their entourage, and b) the number of production crew who quietly appear around the stage to watch.

Stevie, who looks fabulous for whatever age she now is (one doesn’t like to ask such undignified questions of a heroine), swept on stage to a huge roar from the audience, and said a polite hello to my co-judges Sharon Osbourne and stand-up comedian Howie Mandel.

She then turned to me, flashed a steely stare, and said, ‘And as for you, Piers, don’t you dare buzz me!’ There was never going to be much chance of that. I’ve been a diehard Fleetwood Mac fan all my life.

Interestingly, Stevie sang live, without any pre-taped support. This is incredibly rare when modern music acts appear on TV shows – too much to lose with one dodgy performance in front of millions of viewers.

But she sang with such clarity, passion and soul that the studio erupted at the end.

I stood and cheered, and she blew me a kiss and winked. Something I’ve dreamed of many a teenage night.  Ah, they don’t make rock chicks like Stevie Nicks any more.

>>> How about a Stevie Nicks interview on your show Mr. Morgan??