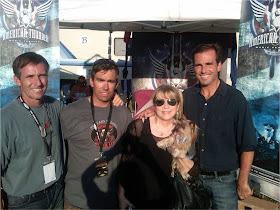 Lee Woodruff tweeted this photo of Stevie.. her dog and 3 of the 4 Woodruff boy's... How cool is that!

Stevie's in Sturgis, SD tonight to perform at the American Thunder Music Festival along with Jeff Bridges and John Fogerty - an all star benefit concert in support of the Bob Woodruff Foundation.


Update:  From what I've read, Stevie's portion of the show opened with Landslide... Stevie did perform Soldier's Angel... and a storm was brewing in the midwest last night.... That crazy wind followed her from Colorado... Jimmy Paxon said it was really something and that the wind at Red Rocks was nothing on this.  Drums blown over, lights swaying... But they soldiered on.
Nickslive at Thursday, August 11, 2011
Share