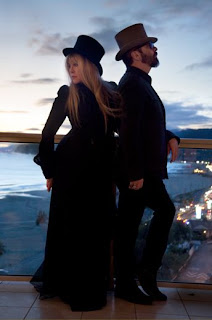 TASMANIAN baby boomers can relive their music glory days over the coming months as a wave of 1980s megastars rolls into Hobart for shows.

Among them will be Fleetwood Mac's lead singer, Stevie Nicks, whose solo show will include the internationally renowned pop and rock musician Dave Stewart, from the Eurythmics.

Nicks' international popularity is riding high again following performances by the reformed Fleetwood Mac and an episode of the TV singing show Glee dedicated to the band's best-known songs.

Stewart co-produced Nicks' new solo album, In Your Dreams, her seventh solo effort and first in more than a decade. 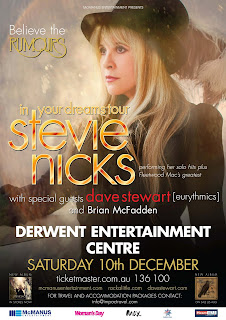 Both Stewart and Nicks also plan to perform their greatest hits at the Derwent Entertainment Centre on December 10.

Promoter Andrew McManus said Nicks had one of the most unique and recognisable voices in the history of popular music.

"She is one of the greatest songwriters of all time," he said.

It will be the first time Nicks has performed in Tasmania and the final performance of the In Your Dreams national tour.

Tickets go on sale tomorrow at 9am through Ticketmaster.