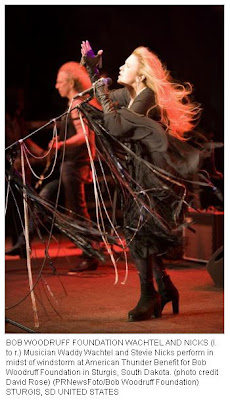 STURGIS, S.D., Aug. 16, 2011 /PRNewswire/ -- The inaugural American Thunder Music Festival, a benefit concert for the Bob Woodruff Foundation, made history in front of an audience of 50,000 fans this past weekend (August 13) when Jeff Bridges hosted and performed  along with Stevie Nicks and John Fogerty.  Nicks performed in the midst of a howling thundering windstorm and tornado warnings...  The show was the first major benefit concert in the 71-year history of the Sturgis Motorcycle Rally.

Rock and Roll Hall of Fame inductee Stevie Nicks performed her classic hits "Landslide" and "Rhiannon" along with a haunting version of "Soldiers Angel" which she told the audience was written and inspired by her many visits over the years to Walter Reed Hospital and Bethesda to visit wounded soldiers.


The moment could not have been more dramatic.  Commented American Thunder's creator David Clark, "Our giant 40'x60' foot backdrop was ripped from the rigging and went sailing through the back of the stage like a leaf in the wind.  I was on the verge of pulling the plug.  At that point I looked at a determined Stevie Nicks as she braced herself against the wind with hair flying and those famous streamers from her mic violently flying as she launched into her song about the need to care for the country's wounded warriors.  Over 50,000 people watched with me in amazement as Stevie continued to perform.  It's no exaggeration to say that this was the most emotional moment I've ever witnessed at a show."