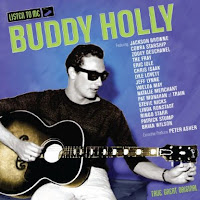 September 6th marks the date that Listen To Me: Buddy Holly a tribute album is released in which Stevie's remake of "Not Fade Away" appears. On September 7th - Buddy's Birthday - will be officially declared Buddy Holly Day in Los Angeles.  On this day Buddy will receive his first star on the Hollywood Walk of Fame.  That evening the celebration will moves to The Music Box in Hollywood for a special invitation-only concert and birthday party with special guest performances of Holly's music by many artists who have been influenced by and love Holly's music, as well as friends and family members from Holly's life.

The concert event will be filmed in HD for a PBS special airing in December 2011.