STEVIE NICKS Live in Atlanta... Included "For What It's Worth" Video 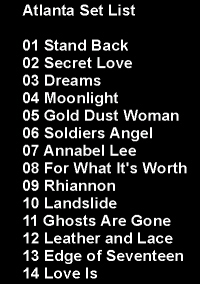 Stevie's show went off without a hitch last night in Atlanta at Chastain Amphitheatre... Atlanta was originally scheduled for Monday night but because of medical reasons it was postponed until Wednesday which sadly meant cancelling Indianapolis.  We later found out that it was Stevie's vocal chords that were sore... Not so much from the singing but from talking.  She had been doing a lot of press lately and being the chatty person that she is... she just over did it a bit.  So that coupled with being on tour, just wore her voice down... So she obviously was advised to take a few days rest, which she did...

She spoke early in the show about how she had been on vocal rest due to press she had been doing for the new album... According to reports you could hear it in her speaking voice a little, but her singing voice was spot on!  The setlist remained intact from Woodlands on August 13th.  Two songs in total have been dropped since the beginning of the tour.. Sorcerer and unfortunately the lead track from her new album "In Your Dreams".  But with the ever popular Landslide back in the set and Leather and Lace, which hasn't been around in years... It's all good.  A noticeable change in the wardrobe department, Stevie ended the night in the white top she had been wearing beginning with Edge of Seventeen, but on this night she left out the white dress.

"FOR WHAT IT'S WORTH" VIDEO
Another major change was the "For What It's Worth" video made an appearance during her performance of the song... Descriptions of the new video for Stevie's new single, which hasn't actually premiered yet, say it looks really beautiful and very fitting for the song... The video was shot in the desert a few weeks ago with an old bus used as a backdrop as if they were driving across the USA.  Reports say there are a lot of close-ups of Stevie in the video - on the bus, getting her makeup done, playing guitar, hanging out with Dave Stewart and Mike Campbell.  Plus there are images of her standing out in the desert in black flowy chiffon with the wind blowing.  Stevie's niece Jessica, appears in the video as a makeup artist doing her makeup.... CAN'T WAIT TO SEE IT!!