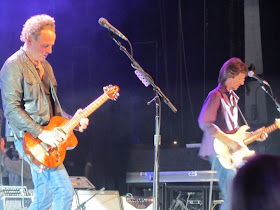 
Lindsey Buckingham has been sticking to a handful of talking points in all of the press for his new solo album, Seeds We Sow, and he repeated them in his stage banter at the Town Hall in Manhattan last night. Basically: he's been splitting his creative life between what he calls "The Big Machine" (Fleetwood Mac) and "The Small Machine" (his often iconoclastic solo career), and the difference is akin to making blockbuster movies and arty independent films. This is a good analogy, but it seems more applicable to his studio output than this live performance, which erred on the side of an earnest blandness, at odds with the genuinely quirky sounds of much of his early solo work (not to mention his music with Fleetwood Mac).

Buckingham opened this show with a handful of solo acoustic tunes that showcased his impressive finger-picked guitar technique before being joined by a trio of sidemen, who performed with great precision without necessarily augmenting his style. Though some selections from Seeds We Sow, such as the anthemic "In Our Own Time" and a driving "Illumination," made a good case for Buckingham's continuing creative vitality, it was difficult to buy his assertion that toothless numbers like "Stars Are Crazy" and "End of Time" are an artistic leap forward when they immediately followed the truly odd (and still magnificent) "Tusk" on the setlist.

Continue to the full review at Rolling Stone


Between songs at the Town Hall on Tuesday night, Lindsey Buckingham spoke wryly of the big and small machines that have governed his career. The former was of course Fleetwood Mac, the protean pop outfit that Buckingham joined in the mid-’70s and subsequently helped transform into a megaseller. The latter, as was clear from the large number of empty seats, was Buckingham's solo career, which he likened to a Hollywood director's side gig crafting commercially iffy yet artistically fulfilling indies. Throughout the show, Buckingham deftly balanced the familiar with the fresh—including plenty of songs from his new record, the intermittently great Seeds We Sow—powering through the less fan-friendly segments with a riveting fierceness.

That edge was most apparent during the opening portion of the concert, which featured Buckingham alone onstage with an acoustic guitar (or rather, guitars, since an assistant brought him a new ax after each song). It's hard to know whether Buckingham feels he has something to prove—after three decades with the Mac, he's still far less famous than his bandmate Stevie Nicks—but he played with a near-demonic intensity, showing off his spiky, locomotive-style fingerpicking technique and still-deadly howl. Buckingham turned "Go Insane" (the new-wavey title track to his 1984 sophomore album) into a haunted meditation, and reached peak intensity on a barreling version of Fleetwood Mac's "Big Love." Folky Rumours lark "Never Going Back Again" showed up in impressionistic guise, with Buckingham stretching out each syllable of the verses to build maximum tension.

Continue for the full review


Spiraling Guitar Solos to Pace or Stoke Songs
By JON PARELES
New York Times
Lindsey Buckingham’s fingers started to race as soon as he’d basked in some applause at Town Hall on Tuesday night. A half-dozen songs later, all played solo with guitar, they had barely rested. His fingers had done dazzling things: fingerpicking that could be pristine and meditative or pointedly aggressive, counterpoints of staccato thumb-picked bass lines and gliding melodies, quasi-Baroque austerity leading into frenetic strumming.
The guitar was the full partner of his voice, and sometimes the senior partner, pacing the songs and stoking their dynamics, supporting the vocals or sparring with them, hinting at ragtime and raga, grabbing the melodic foreground. Mr. Buckingham’s guitar parts tore away the pop exteriors of songs he originally recorded on his solo albums and with Fleetwood Mac. They unveiled the desperation in songs like “Trouble” and “Never Going Back Again,” and they propelled him to howl, moan and shriek. Performing alone, he stretched pained moments into huge crescendos.
Continue to the full review
Lindsey Buckingham's mastery of guitar, voice and songwriting at Town Hall
by: Jeff Slate, NY Rock Culture Examiner
Most of the over-55 rocker set are phoning it in these days, playing it all too safe amidst diminishing skills.  So it was a true pleasure to be blown away by a set of mostly solo material by sometime-Fleetwood Mac member Lindsey Buckingham's performance at Town Hall last night.
Continue to the full review
Lindsey Buckingham Embarks on New Solo Tour
Matthew De Marco, Clifton Rock Music Examiner
When you get home after attending a rock concert—a good rock concert—and you sit down and go through your pictures, you’re going to think to yourself one of two things: either, “Wow, that show was so intense, my ears are still ringing,” or “That show was really good—it’s a shame more people weren’t there.” Tuesday night’s Lindsey Buckingham show is a great example of the latter.
At the Town Hall, located on 43rd St. between Broadway and 6th Ave., Lindsey Buckingham, the lead guitarist and sole male vocalist of the legendary Fleetwood Mac, played an inspiring concert, promoting his new album, Seeds We Sow…though, it seems not too many people knew about it. The small concert hall was nowhere near sold out, but those who were in attendance were in for a real treat.
Continue to the full review 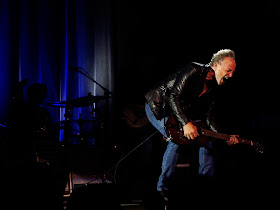 This was my seventh sojourn to an LB solo show. His first Town Hall gig, complete with a literal guitar armada, was on March 31, 1993, in support of the brilliant Out of the Cradle, still one of my system-audition benchmark discs. A decade-plus later, he hit Town Hall on October 10, 2006 to share the acoustic-driven Under the Skin. Wherever and whenever I've seen him, he's always been riveting, intense, and driven — just as he was on Tuesday, from my 10th row just-a-hair-left-of-center vantage point. And Town Hall's wonderful artist-friendly acoustics well-suited the ebb and flow of this fabulous 100-minute set.

Continue to the full review at Sound and Vision
Nickslive at Wednesday, September 28, 2011
Share