A man as obviously aware of his significance in musical history as he is of his relative obscurity as a solo artist - in comparison to his former band, and his former bandmate/partner Stevie Nicks - Lindsey Buckingham's approach to the stage just after 8 p.m. at the Pantages Friday night was an appropriate one, his lithe body popping into sight with no-nonsense aplomb before the house lights had even completely dimmed, giving a quick "Namaste" bow to the intimate audience gathered to take in the beginning of his tour in support of a new album, Seeds We Sow. 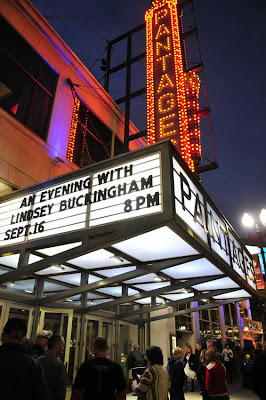 I imagine he's just as aware of his indisputable talent not only as a songwriter and producer, but also of his still-strong skills as a vocalist and guitarist, starting out his set with fiercely finger-picked guitar work matched equally by fiercely emotional vocals on "Shut Us Down," the eighth track off his 2006 album Under the Skin. His solo start to the performance was as intense as if he'd had a full band backing him.

Guitar nerds and rock fans theater-wide absolutely lost it right off the bat, and with perfectly good reason.  From the first song 'til the last, Buckingham's performance was all dynamics and emoting. Man, this man can emote, through the power with which he plucks those strings, his personal and emotional lyrics and their passion in delivery. Add these qualities to his widely-renowned abilities as one of the most gifted songwriters of our time, and his performance was just moving. And this audience moved right along with him, from start to finish.

Even on tunes popularized in their full band arrangements (think Fleetwood Mac songs like "Big Love"), Buckingham was able to carry the songs with just his acoustic, and his voice. Heavy. It takes a lot of verve to carry that sort of power onstage alone, unsupported and unbacked-up by a band as he was Friday until a third of the way through his set when a band (and a set of glitzier lights) joined him. It was impressive. 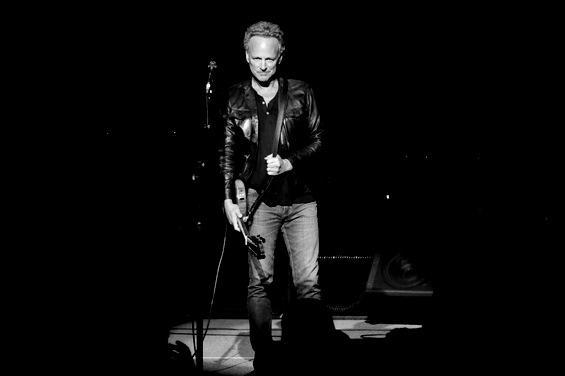 A high point of the evening was his performance of "All My Sorrows," a cover of the folk standard/Kingston Trio B-side that appeared on Buckingham's 1992 album Out of the Cradle. With the band joining him onstage for some impressive harmony work, the richly lush result sounded like the Association back when the Association still sounded as good as the Association. Damn. And "In Our Own Time" off his new album was also a winner, which honestly might have turned me off had I had absolutely no context for the song, given my propensity to shun new and unexpected sounds. But knowing, "Oh, it's Lindsey Buckingham," I instead respond with, "Oh, that electronic-y, new-agey, technical guitar-y, super intricately-arranged synthy synthy synthy song? It...unexpectedly rocks!"

It's near impossible not to compare Buckingham's performance to Stevie Nicks' appearance at Mystic Lake Casino not even a month ago. He likely would not have translated well to that stage at the Mystic Amphitheater, while if Nicks had played the Pantages it likely would have resulted in a more personal and memorable experience than her performance to that large, outdoor venue. Nicks has definitely become more the "character" who can carry a large outdoor audience, but Buckingham seems perfectly at home in this small theater and likely couldn't grow his solo sound to a venue less intimate than this; that's a good thing.

So, okay, I can't resist. Let's go ahead and judge the two for comparison's sake. It's inevitable, let's go there - it's like when Glen Campbell and Tanya Tucker both came through town at different casinos on different tours in the same month - who did better? Well, Lindsey did "Tusk" and "Go Your Own Way," two of the most butt-shakin', feelin' good about life and music and everything else in spite of their downer lyrics songs of all time. Stevie talked about some witchy stuff and mysticism a bunch and wore a lot of different shawls, and she brought her vocal coach onstage to sing with her. While it was a good show, I think the winner's clear. Okay, neither of them had a USC marching band in tow, but the intent and spirit of "Tusk" was still there: Lindsey, arm up! You're the winner! (I don't mean to promote the spirit of competition and bitterness but really, if the two come to town again in such close proximity to one another, and you can only afford one ticket, come over here and sit by my side and I'll whisper in your ear which ticket is the surer bet. Liiiiindseeeeeey shhhhhhhh...)
I mean, let's face it: musically, he's one of the most talented and influential artists of a certain era of rock, and you don't need schlock to emphasize or complement that. A man singing with his guitar in a small theater will do just dandy.

Critic's bias: New fan of Buckingham's new stuff, old fan of Buckingham's Fleetwood Mac songs.
The crowd: You know what it's like when a performer meets his audience, and vice versa - energy is equal, song choices are agreed-upon? This crowd was right there with him.

Overheard in the crowd: Jerk in audience: "Where's Stevie?" Audience: "Boo hissssss" "Come on!" Buckingham: "And as I said, there is a new album... and unfortunately for that one gentleman Stevie's not on it. What show is he at?" And later, funny guy in audience: "Screw Saturday Night Live!"

Random notebook dump: You know what post-1980 Lindsey Buckingham is like? Okay, I think I've got it: when I was a kid, there was a show on TV I'd stay home from church to watch on Sundays. It featured a woman in a new-wavey, electronic but still totally rock and roll (but with requisite pop sensibilities still intact) band who by day went by the name "Jerica," and who by night went by...

This is not to disparage Buckingham, not at all, but to do my best at explaining the strange intersection at which he situated his folk and rock roots with the new wave that had enveloped the music world by the time he was ready to move on to a solo career. It's strange, and strangely appealing, and just downright awesome. I say this in full recognition that this cartoon was obviously creating a pastiche of a true cultural phenomenon that I was at my age unaware of, so really it's totally way-off to compare him to it, but moving on...