"His self-taught fingerpicking style, with a clean and bright tone, creates a distinctive sound that unites his work from his 1970s records with Fleetwood Mac to the present." 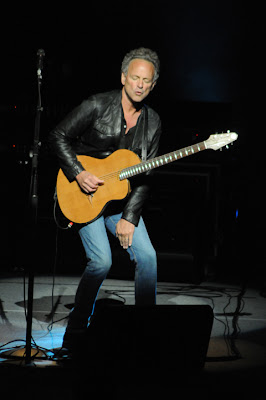 Sometimes rock stars seem to regard their job as a chore, or a sacred duty—but the best performances come from people who just seem to love what they do, and consider themselves lucky to be doing it. When the performer has talent, charisma, and restless creativity, those of us offstage are lucky too. Such was the case with both of the performers I saw on Friday night: 23-year-old local singer-songwriter Caroline Smith, and 62-year-old rock legend Lindsey Buckingham. Both have just released strong new albums, and both seemed to be having the times of their respective lives.

Buckingham was first, taking the stage at the Pantages just a few minutes after 8:00. It was my first time seeing Buckingham perform—with or without his band Fleetwood Mac—and while I certainly didn't expect a bad show, I was surprised by the energy, focus, and bounding enthusiasm Buckingham brought to the stage with his three-piece touring band. Like David Byrne of the Talking Heads does, Buckingham worked his old band's big hits into a solo set with inventiveness and intelligence, shedding new light on both bodies of work.

Fleetwood Mac's astounding commercial success—the band still gets together every once in a while for tours during which, as Buckingham put it on Friday, "commerce is robust"—has bought Buckingham the freedom to do whatever the hell he wants, when he wants as a solo artist. What he wants to do right now, it seems, is to keep making new music.