Review: Lindsey Buckingham “Seeds We Sow” deserves to be heard 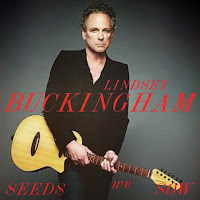 
Fleetwood Mac’s Lindsey Buckingham is on this list as one of the Top 10 guitarists in the game, and certainly one of the most underrated.

His solo career has included several outstanding efforts like “Go Insane” and “Out of the Cradle” that have also often flown under the radar. “Seeds We Sow” deserves to be heard.

Buckingham’s sixth solo album and first self-release, features plenty of his fretboard virtuosity, whether it’s the rippling acoustic beauty heard on the title track or the finger-picking wizardry that rises to the top of “Stars Are Crazy.”

For fans of the mighty Mac, Buckingham offers several selections that will evoke echoes of the band that brought him to fame, namely the rockin’ “Tusk” styled “One Take,” the uptempo “That’s the Way That Love Goes” and the hook-filled big throttle of “Rock Away Blind.”

Guitar aficionados will find a lot to like about the first single, “In Our Own Time,” while the disc finishes with an imaginative cover of the Rolling Stones’ “She Smiled Sweetly.”

Tracks to download: “One Take” “In Our Own Time.”