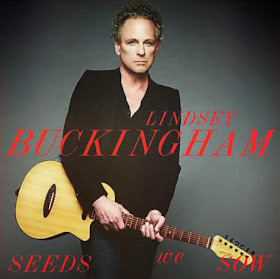 "Buckingham continues to amaze with not just the technical brilliance of his guitar playing, but the sheer variety of different tones and stylings"

It’s surprising how easily Buckingham seems to slide back into the retro mode when there’s a Fleetwood Mac tour on the horizon. Yeah, the money’s good, but I doubt he needs it, and the man we meet in his solo recordings seems so content with his new life (happily married, three kids), that it feels odd to see him retreat back into the role of “touring past glories” hitmaker. Fortunately, though, neither domestic bliss or the glow of nostalgia are blunting his considerable talents as composer, producer, and guitarist.

On his third album in five years, Buckingham handles not only the writing and producing, but plays nearly every instrument himself, and self-released Seeds We Sow through his own new label. Perhaps more than any of his peers, Buckingham continues to amaze with not just the technical brilliance of his guitar playing, but the sheer variety of different tones and stylings: “One Take” is busy and blistering, “In Our Own Time” glows with shimmering harmonies, and “Rock Away Blind” recalls his clean, epic fretwork on Mac classics like “Go Your Own Way.” And while it can be argued that his old band’s turbulent times caused him to dig deeper with his songwriting than he does today, he’s still able to inhabit a song like “Stars Are Crazy” or “That’s The Way Love Goes” as though he were still burning with the flames that stoked the sexual carousel that was Mac in its heyday. For sheer gorgeous pop genius, highly recommended.
Nickslive at Friday, September 09, 2011
Share