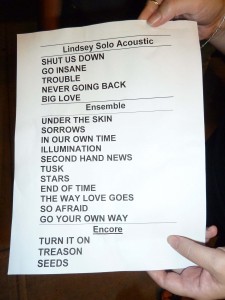 If you were not at Lindsey Buckingham‘s show at Town Hall in New York on September 27, 2011, you missed something special.  Lindsey Buckingham seems to get better with age as he still makes amazing music and when he performs live, he sets the bar a little higher for the definition of the word “amazing.”  In his nearly 2 hour set, Lindsey Buckingham ran the gamut of his career playing songs from his early days in Fleetwood Mac to his recent album “Seeds We Sow.”  He began the show with a 5 song acoustic set that included “Trouble,” “Go Insane,” “Big Love,” and “Never Going Back Again.”  The show could have ended at that point and you would have gotten your moneys’ worth, but the show was just beginning.  Lindsey Buckingham’s voice was absolutely flawless and when he sang in his whispered voice, you could hear a pin drop in the theater.  After nearly every song, Lindsey received a standing ovation.

Continue to the full review at According to G + more photos