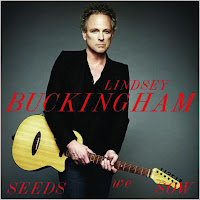 
When Lindsey Buckingham sings, “I woke up in the middle of the night/with you on my mind,” it’s hard to avoid thinking he means his many guitars, acoustic and electric. Throughout his solo album “Seeds We Sow” (Buckingham Records) his fingers fly, often in layers of fast, restless finger-picking that he clearly couldn’t wait to assemble. He played, produced and mostly wrote the songs all by himself, except for one songwriting collaboration and a version of the Rolling Stones’s “She Smiled Sweetly.” While Mr. Buckingham obviously selected every buzzing or pinging guitar tone carefully, the production has the low-fi informality of a demo. He maintains the sense of pop melody he brought to Fleetwood Mac, and he sings in an expressively frayed latter-day version of his old high tenor. His lyrics philosophize about love, loss and passing time. But his guitar geekery is the album’s governing force, and it’s usually for the better.