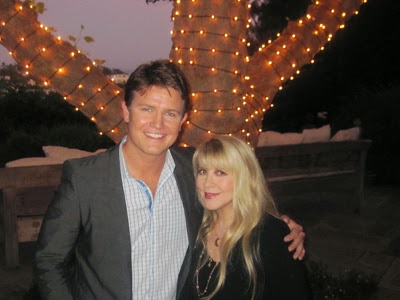 
The Queen of Rock and Roll opens up her home, and her heart, to Sunday Night. Stevie Nicks, despite forty top ten hits and 140 million album sales, details her toughest battle yet. Her tell-all revelations, after taking reporter Alex Cullen on a tour of her LA mansion.

I got the feeling Stevie Nicks didn’t want us to leave. After getting the full tour of her house, I felt as though we were about to be asked to stay for dinner.

Such is the charm, warmth and mystery of this true rock goddess.

Usually, after an interview with a star, the crew and the star go their separate ways. But after our interview with Stevie Nicks it was time to catch up, reminisce, and talk about the extensions Stevie wanted on her bedroom.

As we walked through the grounds of her sprawling LA mansion it struck me how much Stevie craved to be treated as a normal person. We discussed her pool that had been put in way back in 1938, the Christmas lights that hadn’t been taken down since Christmas five years ago, the garden and the perfect roses and the part of the yard where they filmed her latest film clip.

It was like being in the presence of a slightly unhinged aunty I hadn’t seen for a few years and we were catching up on all the latest developments about the place.

We were under very strict instructions during our interview. Everything had to be lit perfectly and there was to be no ‘off the cuff’ shooting. In other words, every shot had to be set up and okayed by Stevie’s manager who was ever watchful, ever vigilant.

Nothing was sacred for Stevie during our interview. There was everything from the inter band relationships to the mountains of cocaine that found itself up Fleetwood Mac’s noses every night (and day) of the week.

The time Stevie was offered heroin and told the person to leave her house immediately or she’d call the police. It was truly fascinating stuff. We spoke for an hour and a half but it could’ve easily been longer.

Walking through Stevie’s house was simply surreal. There, on a dining room table is a photo with some of her friends. Just Mick Jagger, Neil Young and Stephen Stills. Next to that is a photo of Mick Fleetwood and Stevie taken during the late 70’s at the height of their fame. I couldn’t help but notice how much taller he was. And then there’s the famous blue lamp given to her by her mother which she wrote about on her album Enchanted.

But our afternoon was about to get a lot more interesting. Stevie wrote and recorded her latest album In Your Dreams entirely in her living room with one half of the Eurythmics Dave Stewart. Stevie was adamant that we had to hear her favourite song off the new album right there on her living room couch.

Sunday Night producer Pen Cross and I sat there pinching ourselves before Stevie’s personal assistant Karen brought in the laptop and plugged it into the stereo. It’s not every day you get to hear a rockstar’s new album on their couch in their house! It wasn’t long before Stevie was yelling at Karen to ‘turn it up!’ as she spun about the room with eyes closed, singing and dancing, totally lost in the song and the beauty of her art.

We didn’t know if we should get up and dance too but we sensibly chose to stay seated and watch this self-titled gypsy princess float around the room. Stevie was so proud to show us the fruit of her work in the place where it was born. Her voice is slightly huskier but still unmistakably that of Stevie Nicks.

On the piano we were lucky enough to hear her play ‘Rhiannon’ but afterwards I noticed what looked to be a bullet hole. I had to ask about it and sure enough there was a bullet hole in the side of Stevie’s piano with the bullet still lodged in the wood! Stevie told us it happened when she was moving and someone had fired a shot at the removal truck and she’d chosen to leave it there. She told us it adds character. It’s just one of the many quirky parts of Stevie’s life that makes her truly and beautifully unique.

It was finally time to leave. “I can’t wait to get back to Australia” she told us. “We should all catch up for dinner”. That could so easily be the polite thing to say or a throwaway line. We could only dream of us mortals at the table with rock royalty! It would be much more subdued than those wild tours of the late 70’s and the beauty of it is, I really think she meant it.

Check out the Photo Gallery

Sings: # Once in a million years a lady like her rises #

Stevie Nicks: When you stop doing other people's cocaine and start buying it yourself, that's when you know you're starting to have a problem.

Sings: # And your life knows no answer #

Sings: # Your life knows no answer #

Stevie Nicks: I love my voice, I do.

Stevie Nicks: I love the fact that my voice doesn't sound like anybody else.

ALEX CULLEN: How would you describe it?

Stevie Nicks: I would just kind of describe it as a little kind of gnome-like voice.

Sings: # Some call her strange lady from the mountains. #

ALEX CULLEN: Stevie is 63 and after a 10-year break with no new songs, found the inspiration to write again during a Fleetwood Mac tour of Australia in 2009.

Stevie Nicks: This song, that began in Australia, really is the reason this whole album was ever even written.

Sings: # Some call her strange lady from a mountain #

ALEX CULLEN: The song is on her new album, 'In Your Dreams'.

Sings: # She runs with the ones she can't keep up with #

Stevie Nicks: It's like a big English cottage, you know, and the roses, if you smell them, smell like candy and I've never personally smelled anything like that, it's so wild.

ALEX CULLEN: Yes, I sure did. I like the Buddhas as well. Her home tells the story of a life lived with the volume turned up.

Stevie Nicks: My inspiration comes from real life, from everything, you know? And then I have my amazing memories and I have a mind like a little steel trap so I can remember everything and so sometimes, I just reach in my bag of treasures and, you know, I pull something up that happened a long time ago.

ALEX CULLEN: When Stevie was 16, she wrote her first song to a boy who broke her heart. "I've loved and I've lost and I'm sad but not blue."

I once loved a boy who was wonderful and true #

Stevie Nicks: Yes. (LAUGHS)
Sings: # But he loved another before he loved me #

And I knew he still wanted her, 'twas easy to see. #

Stevie Nicks: From that day.

Sings: # Thunder only happens when it's raining...#

ALEX CULLEN: Stevie's road to stardom began when she met Lindsey Buckingham. They formed a band and between gigs, Stevie worked as a waitress and cleaner.

Stevie Nicks: Lindsey and I did not have enough money to hardly buy food
and pay for our rent and our car that didn't have reverse. C'mon, we couldn't even park in a parking place if we couldn't go out frontward.

ALEX CULLEN: And then an English band, Fleetwood Mac, changed everything with a phone call. What was it like getting that call from Fleetwood Mac?
"Come and join us".

Stevie Nicks: They called on the very last day of 1974 and I said to Lindsey, if we joined Fleetwood Mac, we'll make some money. And guess what? The rest is history.

Stevie Nicks: We became so famous.

Fleetwood Mac music video: # You can go your own way #

Stevie Nicks: It was crazy. It was pretty crazy. We had so much money, we didn't know what to do with it.

ALEX CULLEN: When did drugs, then, become part of it?

Stevie Nicks: That was, you know, during the year of the making of Rumours'.

ALEX CULLEN: 1977, that tour to Australia, you had a pretty intense list of backstage requests. Do you remember what they were?

Stevie Nicks: It was probably like a tonne of cocaine.

ALEX CULLEN: It was. It was. Yeah. I'll take you through them. There was a medieval marquee.

Stevie Nicks: Well, obviously that's English, so, not my fault.

ALEX CULLEN: Limes. Lions - that would have been cool!

ALEX CULLEN: 5-star alcohol and six dozen bottles of Heineken and the band was supposed to be met at Sydney Airport with two ounces of cocaine.

ALEX CULLEN: How bad did it get?

ALEX CULLEN: With all the drugs and the success, what followed was probably inevitable. Band members John and Christine McVie split, Stevie and Lindsey broke up and then Stevie hooked up with Mick. It all spilled out onstage and into their songs.

Stevie Nicks: Never a dull moment. It's unfortunate it had to be
so hard for all of us but at the same time, again, would you change it? No, because then you wouldn't have all those amazing songs. Had you all been happy, it would have been different. No, it would have been a bunch of happy songs and there would never have been - Fleetwood Mac would have tanked the first album out if we'd all been super happy.

ALEX CULLEN: Today, Stevie is sober and single.....still searching for the right man.

Stevie Nicks: It's hard to find a man these days.

ALEX CULLEN: Is it?

Stevie Nicks: I think it is. I think it's all about internet dating and you know...

ALEX CULLEN: What would your profile say?

Stevie Nicks: The profile would say "Very busy woman, "has absolutely no time, "is always gone whose life doesn't stop." Those guys are far and few between. So I have just found that it's easier to be single.

ALEX CULLEN: Can you ever see yourself not performing?

Stevie Nicks: No. No, I would see myself being able to sing into my 70s
because I will still have a really good voice when I'm in my 70s.

ALEX CULLEN: So just go as long as you can?