LINDSEY BUCKINGHAM "SONGS FROM THE SMALL MACHINE LIVE IN L.A.
Rock’n’Roll Hall Of Famer Lindsey Buckingham just may be one of the very few Americans who most changed the face of British Rock. As the male lead singer for Fleetwood Mac, this singer/songwriter/guitarist/producer took an underground blues band and helped make it into one of the most respected and best-selling bands in the universe. His voice … his intricate guitar playing … his compositional prowess, they’re all instantly recognizable. And he’s still going strong.

On November 1, Eagle Rock Entertainment will release a DVD of Lindsey Buckingham’s Songs From The Small Machine: Live In L.A., which was filmed in high-definition with DTS Surround-Sound, Dolby Digital 5.1, and Dolby Digital Stereo at The Saban Theater in Beverly Hills, California in April 2011.

The two-hour 19-song show will be released on
DVD, Blu-ray, and as a DVD/CD set.
MSRP $14.98 for DVD, MSRP $19.98 for Blu-ray, $19.98 for DVD/CD set]. Filled with his most beloved songs, including such Fleetwood Mac classics as “Go Your Own Way,” “Second Hand News,” “Big Love,” “Tusk,” “I’m So Afraid” and “Never Going Back Again,” blended with material from his new album Seeds We Sow (“In Our Own Time,” “Illumination,” “Stars Are Crazy,” “That’s The Way Love Goes”) the DVD and Blu-Ray also feature a Buckingham interview.

Songs From The Small Machine: Live In LA opens with a solo acoustic set that accentuate Buckingham’s nimble fretwork and multidimensional voice. The band join him for the remainder of the concert leaving the audience on their feet, shouting for more. The show closes with an acoustic encore of the title song from Seeds We Sow– a final reminder that this is one artist who refuses to rest on past laurels but, instead, prefers to look towards the future.

Lindsey Buckingham is out on the road in America touring with his band in support of Seeds We Sow. 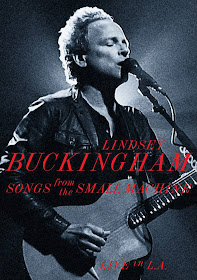