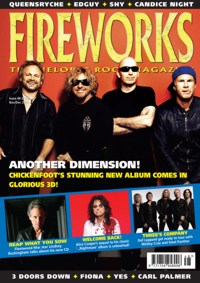 It’s quite amazing when you consider that vocalist and guitarist Lindsey Buckingham has co-written the ninth biggest selling album of all time, in the form of Fleetwood Mac’s legendary ‘Rumours’ record. Only his second record with the band, he penned three songs, including the huge hit ‘Go Your Own Way’ as well as a co-write - the contributions he and then partner Stevie Nicks made cannot be overlooked, as Fleetwood Mac became worldwide superstars. What is sometimes overlooked is the tasteful and skilled solo work that Buckingham has put out over the years. Releasing solo albums every so often, which showed off his skills as a songwriter, vocalist and guitarist with a distinctive finger picking style, he has continuted to hone his craft alongside his work in Fleetwood Mac. With his sixth album ‘Seeds We Sow’, he has created a record that takes his love of recording songs with just vocals and guitar and meshes it with a fuller sound, to create one of his most accomplished efforts yet. James Gaden talked to Lindsey to find out all about it...

I’m impressed with your new album, I must say. It’s a very strong record.

Thank you! It’s funny - I didn’t really plan on making a record this last year, Fleetwood Mac had just gotten off the road and the time opened up... so I thought I’d better fill it! (laughs) So, y’know, maybe one of the reasons it worked out so well was that I didn’t have any agenda going in, it was kind of an off-hand thing. I think that a lot of stuff that I have been working on over the last seven years or so, especially solo, all just came together in this one place.

That’s what struck me - I thought this album sounds like a bridge between the sparser music of ‘Under The Skin’ and the fuller sound of ‘Out In The Cradle’... I think it sits nicely between those two records.

Yeah - that’s exactly where I think it should be placed. It does seem to harken back to ‘Out Of The Cradle’ a little bit, which is a good thing, a lot of people seem to like that one!

I noticed that throughout your career you’ve been very adept at taking personal things that have happened to you and crafting them into songs... was there any specific theme or inspiration behind the material on this album?

It’s funny, the way lyrics have evolved for me, in terms of the process, the approach. It’s gotten kinda a little more elusive in a way, I think it’s growth. I don’t want to say my lyrics have become more poetic, but I do think they are more open to interpretation. Sometimes I’ll write it and even I’m not entirely sure what it all means until I start putting it together, then I might have a finished lyric and think ‘Oh yeah, now I know what that means!’ (laughs) But I think when I did look at the lyrics collectively when this project was done, the thread that seemed to run through was to do with actions having consequences and the choices you make, while not always easy to define or to judge in the moment, given the perspective of time, sometimes quite a bit of time, you can see what is good in your own life, in your relationship, what is good or bad in the world. It’s all down to this collection of choices we have all made in our lives. So there’s kind of a karmic theme there, that’s where the title comes from, sowing seeds... those come back later on in your life, be it good or bad. When I look back over the last ten or even twenty years, the way I’ve tried to work the big machine - Fleetwood Mac, with the small machine - my solo career, it’s like a big movie scenario versus a small independent film mentality that goes with my solo projects... the two would seem to be opposed but in a larger sense they tend to support each other. In order to do that, you have to keep your wits about you and make choices based on a certain set of values. I guess I was able to feel that the place that I’ve arrived at as an artist, as a person with my family and everything, it all seems a lot of my choices were for the good. So I guess that’s what is reflected on the album.

When you come to make a solo album, do you create a central theme before you start, like the karmic one on this record, or do you just write the songs and let them dictate the shape?

Well, it depends... you just mentioned ‘Under The Skin’ and when I did that, I basically said to the band that I wanted to do two solo albums more or less back to back, wanted to tour both of them and that they shouldn’t bother me for about three years. Just leave me alone! (laughs) For ‘Under The Skin’, that did have a very specific idea, which was to try to do something very sparse, acoustic and intimate. This particular album... as I say, I think the only thing I committed myself to this time was taking on as much responsibility for the process myself as I’ve ever taken, which included playing almost everything, mixing it, engineering it all... that was like a painting process, building up layers. But no, on this album I didn’t have a specific idea in mind, other than the approaches I have arrived at over the last ten years or so. One of those is taking one or two guitars at the most and having that be pretty much the bulk of the track, but still putting production values onto it. That’s something which I’ve been very interested in for a number of years and I keep refining and expanding on it.

With the song ‘Seeds You Sow’, you gave that away free on your website as a precursor to the album launch. Did you feel you had to do that in this day and age, or do you like the fact the internet offers that chance for your fans to come to your website and hear something early?

In America, we’ve put this album out ourselves, I did make some forays into seeing what interest there might be from larger labels... what few there are left! (laughs) I spoke to a friend, Rob Cavallo, who I’ve known for years who was in a good position at Warner Brothers, but I realised that he couldn’t change anything, the system would change him. I talked with my manager and we felt it was just too weird out there for an album like this, for someone like me, on a label. In the spirit of that, to put the record out ourselves, we could do it on our own terms and letting people hear something early allows you to loosen the formula up a little bit. Certainly using the website for that, we completely re-did it for when the album was done, that resonated with the spirit of how the album was going out, it seemed like the right thing to do.

I think with somebody like yourself, you have your own fan base who keep up to date with what you’re doing and I don’t think any of the, like you say, few major labels left could or would offer you anything you couldn’t do yourself at this stage of your career.

It’s true - for someone who is now in their sixties like I am, they’d look at me and think “Well...” There’s a kind of built in momentum with my fan base, you’re right. That comes with a built in fear of getting too involved, but I think people had enough respect for me to look at me, especially to the big companies, they’re so beholden to the boardroom mentality where everything is about the bottom line, nobody at these labels have the kind of autonomy that I saw when I started. They can’t make their own decisions for themselves anymore and I think they had enough respect for me to know they wouldn’t be doing the kind of job I feel the record deserves. And that’s fair enough.

Finally, speculation has been floating around about this for a while - is the Buckingham/Nicks album finally going to be officially released on CD?

Stevie has an album out right now as well, and when she was working on it I spent quite a bit of time over at her house... probably more time with her off the road than I had spent in ages. It’s so funny with Stevie and me, this is someone I’ve known since high school and obviously we’ve had a fairly difficult story to play out together at times, and you’d think by now there would be nothing left to work out, but apparently there is and I find that to be incredibly sweet. The thing between she and myself is still a work in progress and we did talk about it... I think the reason that album never made it to CD was down to inertia. We have talked about the possibility of putting it out, maybe sometime next year or the not too distant future, and you could put some bonus tracks on there, re-release it properly. We haven’t set a timeline or made a decision yet, but I think it would be appropriate. Maybe we could figure out a way to do some shows, just the two of us - that would be a nice change of pace too. So nothing is set in stone by any means, but things will happen next year... I’ll be shocked if there isn’t some Fleetwood Mac action next year. We’ll have to wait and see!

Read the full double page spread where Lindsey talks about his new album, discusses in depth his decision to release the album independently and his upcoming live DVD in Fireworks #48. Available from: