Review: A Guitar Hero Goes His Own Way – The Magic of Lindsey Buckingham


If there was a new video game out there called Underrated Guitar Hero… or Unsung Guitar Hero, Lindsey Buckingham would surely be on the cover.

I have always known him to be nothing short of amazing, but last night’s concert at Royce Hall on the UCLA campus proved it once again.  The man is a living legend, and that is not something I say lightly or very often.

I would love to see him on stage trading licks with bass legend Stanley Clarke.  Okay, yes I have always said Stanley is a living legend and he is… He is the best living musician out there.  There is something very similar about their styles and approach and the way they attack their instruments.  Watching their fingers fly across those strings, seeing an instrument literally transformed into something else… That would be amazing…

Continue to the Full Review by Marc's Muse


Some men gain weight as they get older, and many lose their hair. Lindsey Buckingham, however, has beaten the odds. Reed-thin with a shock of gravity-defying gray hair that reminds one of Jack Nance in Eraserhead, he retains a youthful air and still-keening voice. This is fortunate, as his set included both decades-old Fleetwood Mac hits and more recent solo work. The mixture didn't always cohere, leaving an off-kilter feeling, but the highs were extremely high, and the adoring fans were going to enjoy the music no matter what. 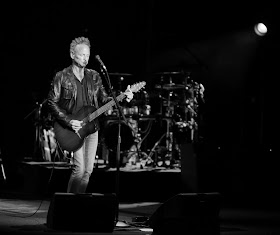 Buckingham led off the evening alone, just himself and his acoustic guitar. He opened with "Shut Us Down" from 2006's unjustly overlooked Under the Skin. A number at once gentle and snappy, it allowed him to show off his world-class fingerstyle skills, bending and popping each string for maximum effect. He kicked things up with the second track, 1984's "Go Insane." Stripped of its dated production (and  Miami Vice visuals), it kept its jangly accents and haunting edge.

​The steadfast picker followed with his biggest solo hit, "Trouble." Perhaps the quintessential Buckingham tune, it combines a lilting melody and catchy chorus with an air of coked-out dread that is, well, troubling. "I should be saying goodnight/ I really shouldn't stay anymore/ Been so long since I held you/ Forgotten what love was for," he coos to a lover who clearly has spooked him somehow. The pretty-but-fucked-up vibe continued through a breathy, languorous version of  Fleetwood Mac's "Never Going Back Again" (aka, "The Song Every College Guy Tries to Learn on Acoustic Guitar"). It's not hard to hear why the Mac were a phenomenon in the late-1970s. Even if they only had Buckingham writing songs, they would have had more hits than most bands could ever dream of.

Continue to the full review at LA Weekly