Lindsey Buckingham at the Capitol Theatre, Clearwater
The Fleetwood Mac singer-guitarist woos an appreciative crowd with tasteful ease.
by GABE ECHAZABAL and TRACY MAY


"It was the night's early, stripped-down readings that gave the clearest insight into the eerie genius that festers inside the brain of Buckingham"


Some believe the whole is greater than the sum of its parts. It's an adage that's proven time and again when a band member with an inflated ego decides to take center stage and fly solo into his or her own career path. More often than not, the results are disappointing and unspectacular. But Lindsey Buckingham obviously doesn't subscribe to that maxim. The guitar virtuoso who has served as an integral part of Fleetwood Mac, arguably one of the hugest and most successful bands of the rock era, has no qualms about breaking away from the enormous Mac machine and basking in the spotlight to show off his many solo talents. A small but passionate crowd of 437 tightly-packed bodies at Clearwater's cozy Capitol Theatre was treated to an intimate evening with Buckingham on Wednesday night and, it's safe to say, it was an evening anyone in attendance won't soon forget. 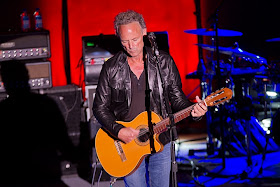