Lindsey Buckingham at the Keswick
By: Mark Wolverton
Broadstreet Review 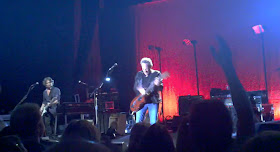 Nostalgia can be a dangerous thing, especially when it comes to music. The songs and albums that speak to the core of our being when we’re passionate and volatile youngsters make an imprint on the soul and heart that never quite goes away-- even when the bands break up in rancor, retire, sell their beloved tunes to corporations for TV commercials, overdose in Parisian bathtubs, or just fade into oblivion.

So when those icons of one’s youth return decades later with new music and new performances, the apprehension can be overwhelming.

Real-life soap opera
Lindsey Buckingham made his mark in the 1970s both as the guitarist and one of the three singer-songwriters of Fleetwood Mac. That group’s history is one of rock music’s most famous soap operas, a saga of intra-band romance and intrigue that the group’s members channeled into their greatest artistic works, such as the classic album, Rumours.

Buckingham, weary of the strife and eager to pursue other musical interests in a solo career, left the group in 1987. The songs from his latest album, Seeds We Sow, are indeed more intimate and restrained than his Fleetwood Mac work, reflecting a greater self-awareness and maturity, as he explained to the Keswick audience.

He began his show quietly, performing a set of some of his most famous songs (“Big Love,” “Never Going Back Again,” “Trouble,” “Go Insane”), armed only with an acoustic guitar and his powerful voice, giving the tunes a fresh interpretative spin that highlighted their essential power and emotion. It was a gutsy move for an artist who’s somewhat infamous for his affinity for studio trickery and sonic manipulations.

Time machine
But soon enough, Buckingham transformed the Keswick from a quiet nightclub into a rock arena, bringing in a three-piece band (drummer, guitarist, and guitarist/bassist/keyboardist) to ramp up the intensity both on his newer solo work and his Fleetwood Mac hits.  He proved his legendary guitar chops with his transcendent soloing on “I’m So Afraid,” displayed an uncanny talent for showmanship and musical arrangement on a spooky version of “Tusk,” and pulled out all the stops to close the main set with his signature song, “Go Your Own Way.”

Lindsey Buckingham managed to transform the Keswick into a melodic time machine that, for a couple of hours at least, made their fans feel 20 years old again.  Not a bad achievement for a guy in his 60s.
Nickslive at Saturday, October 01, 2011
Share