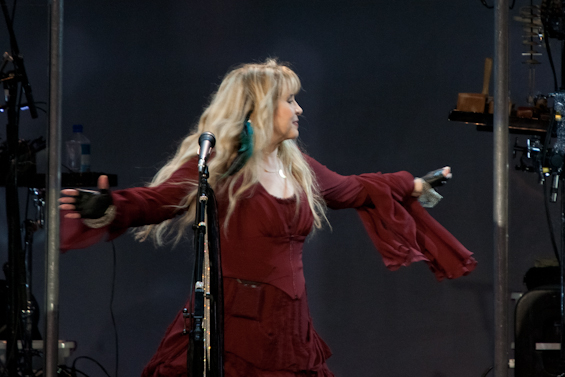 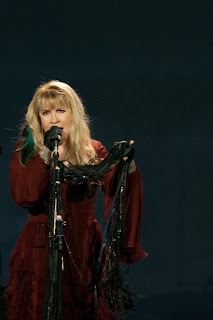 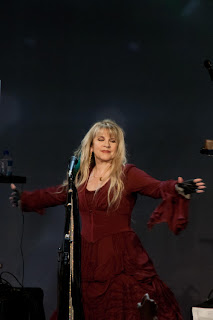 Three things worth knowing about Stevie Nicks concerts nowadays: 1) she limits herself to between two and three stage spins, and only during "Stand Back," which in my experience is always the show opener; 2) her voice continues to sound so spectacular; and 3) only the freaks dress up. Even with Halloween looming, I spotted but one witchy woman in a purple knock-off of Nicks' trademark Ren Faire/sorceress get up, and on another lady, a teensy, tiny top hat. 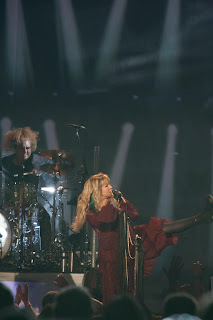 But there are still the costume changes (four looks tonight, including two black dresses, one white and one merlot, all in the iconic, long-sleeved, corseted fashion she's sported for the past three decades; props to Nicks for realizing that covering every inch of your body in fabric will keep you looking wrinkle-free and graceful). And it remains a great show--unlike her famed former Fleetwood Mac flame Lindsey Buckingham (who coincidentally plays the Grove on Monday), Nicks doesn't rely on rote showmanship, repeating the same anecdotes night after night, in the same order, tour after tour. Having caught a one-off performance by Nicks at a desert casino earlier this spring, it was a pleasure and a relief to hear new stories this go-round. The evening felt unscripted--or at least as unscripted as you can be at the tail end of a summer-long national tour.

"This is not a Stevie Nicks Greatest Hits Show!" Nicks announced as she greeted the audience before talking up her new album, In Your Dreams. Using her "magic sequencer," she said, she had woven new songs among old favorites. Judging by the stand-up-sit-down reaction to classics and unfamiliar tunes that ensued, this probably wasn't what this audience wanted to hear--and given the relentless crowd chatter, it seemed that most of the Dreams tracks, which included the Twilight-inspired "Moonlight (A Vampire's Dream)," the war-remembrance poem-song "Soldier's Angel," and the incredible, fresh-feeling "For What It's Worth," were ignored. Too bad: Nicks is clearly proud of her new work, with the songs bringing out an energy that was visibly and audibly richer than what she reserved for standbys like "Dreams" and "Edge of Seventeen."

Continue to the full Review by: By Ellen Griley at OCWeekly
All Photos by Mary Bell/OC Weekly
See the Full Slide Show (28 photos) at OCWeekly

Stevie Nicks an enrapturing presence at the Grove
by GEORGE A. PAUL
OC Register

Stevie Nicks came on strong and finished like a gentle breeze in one of her most intimate Orange County solo shows in recent memory, Wednesday night at City National Grove of Anaheim.

Over the course of a two-hour performance, the Rock and Roll Hall of Famer and Fleetwood Mac mainstay was in fine form. Entering to Missing Persons’ “Destination Unknown” (perhaps a nod to her hard-partying years), she and her nine-piece band tore through “Stand Back” as Nicks did some of those trademark twirls. Then she immediately provided a disclaimer: “This is not a greatest hits tour. I’m promoting a record that I believe in from the bottom of my soul. Let’s get this party started.”

I missed Nicks with Rod Stewart at the Hollywood Bowl (which landed right in the middle of Coachella) but never thought she’d return to play such a small venue. A large portion of the packed Grove audience had probably seen her before, either alone or with the Mac, so hearing a set half-devoted to newer material didn’t seem to be a problem. Those songs all got enthusiastic responses, especially ones prefaced by a riveting background story.

Bolstered by a solo career that crossed the 30-year mark this summer, Nicks’ popularity has rarely waned; the most successful of all Mac musicians, each of her albums has been certified gold or platinum. The 63-year-old singer has a legion of unique followers – female and male – who dress like and impersonate her. Nicks even joined Maroon 5 for a version of “Landslide” when that group played the Hollywood Bowl in July, a testament to her influence on younger bands.

Back in May, In Your Dreams, Nicks’ first studio album in a decade, debuted in the Top 10, with two singles eventually reaching Top 30 at adult contemporary radio. The strong, nuanced collection found her collaborating with longtime friend and co-producer Dave Stewart, the quieter half of Eurythmics, who also has worked behind the boards for Mick Jagger and Ringo Starr. In true classic-rock form, eight of the 13 tracks clock in longer than five minutes. Former paramours Lindsey Buckingham, Mick Fleetwood and Heartbreaker Mike Campbell guest on selected tracks.

“Secret Love,” penned in 1975 about a forgotten tryst, had an understated yet seductive charm in concert; paired with the always-by-her-side backing vocals of Sharon Celani and sister-in-law Lori Nicks, it was truly sublime, with Nicks impressively sustaining a note at the end. Elegant, slowly driving rocker “Moonlight (A Vampire’s Dream),” inspired by seeing the Twilight: New Moon movie during the 2009 Fleetwood Mac world tour, featured horse images on a projection screen, as Nicks spread her chiffon layered arms out for expressive effect and wailed.

A long buildup on “Gold Dust Woman” heightened anticipation and facilitated the singer’s first costume change. Nicks was totally immersed in the Mac tune, while Jimmy Paxson’s prominent beats and Waddy Wachtel’s swirling guitar work added to the mystique. (Most of the top-notch band has been with Nicks for decades. Their familiarity with the older material was evident, though Wachtel also ably handled Buckingham’s guitar drone from the new title track.)

Describing how moved she was following a 2005 trip to visit wounded service members at what is now the Walter Reed National Military Medical Center in Maryland, where she inadvertently experienced a Medivac arrival, Nicks said she’s “never been the same since.” The stark song “Soldier’s Angel” grew out of that: more filled-out musically live, it found Nicks singing dramatically as a picture of her with an American flag and the handwritten lyrics appeared on screen.


Continue to the Full Review at OC Register
Photo Gallery with Photos by KELLY A. SWIFT Located here
Nickslive at Thursday, October 13, 2011
Share