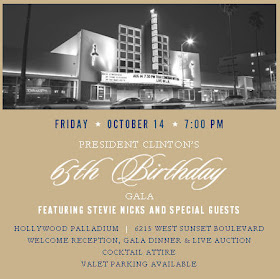 So Clinton asked the band -- which is sometimes together, sometimes not -- to play Friday at his 65th birthday gala at the Hollywood Palladium. (His actual birthday was Aug. 19.)

Buckingham said no, but not for political reasons.

"I was gonna have to cancel two weeks of shows" to do it, he tells me, "because we'd have to go rehearse. It just wasn't possible."

So Fleetwood Mac's Stevie Nicks offered to perform for Clinton, instead.

Here's the Vegas connection. Nicks is performing Saturday at the Hard Rock Hotel. Buckingham is playing Friday at Aliante Station.

Buckingham says it's just a coincidence the two Fleetwood Mac stars -- and ex-lovers in the '70s -- are gigging in Vegas separately on the same weekend.

However, he says the reason Nicks is staging a Vegas show at all is to earn money to cover her costs of putting on a birthday concert for the former Mr. President.

"To get the band up and running (even for one night) is not an inexpensive proposition. So I think (Nicks') idea was to do the Las Vegas show (and a few other tour dates) just to subsidize that effort," Buckingham says. "That's my understanding of it, anyway. That's how it was put to me."

Clinton also is hosting a concert Saturday at the Hollywood Bowl, with Bono and The Edge, Lady Gaga, Usher, Kenny Chesney and Juanes.

A million bucks. What's that get you? Glad you asked: a bunch of tickets to the concerts; seats at sound check; receptions with Clinton; seats at his table; a Chelsea Clinton brunch; and a golf outing with Bill. Ticket sales will go to the William J. Clinton humanitarian foundation.