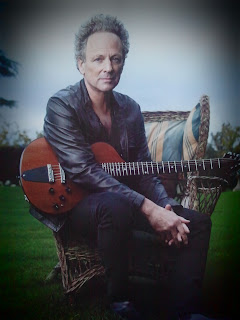 Going his own way for the past few years, Fleetwood Mac’s Lindsey Buckingham recently returned with his sixth solo effort, “Seeds We Sow.”

Unlike his earlier work, which was dark, enigmatic and oftentimes gloomy, this 10-track affair finds the 62-year-old in heart-shaped peace. Now married with three kids, the Grammy Award-winning and Rock and Roll Hall of Fame inductee’s new CD ranges from the soft and melodic “End of Time” to the touching “When She Comes Down” and the hushed “She Smiles Sweetly.”

Now comes Buckingham’s tour, which includes a Nov. 6 show at the Palace Theatre in Lorain. Fans can expect to hear a m lange of solo tunes and Fleetwood Mac songs.

The Vindicator talked to Buckingham about “Seeds We Sow,” his visit last season to “Saturday Night Live” and whether his guitar playing is often lost on younger generations.

Q. In terms of your solo career, this has been a relatively prolific time for you. Your recent effort includes 2006’s “Under the Skin,” 2008’s “Gift of Screws” and now “Seeds We Sow.” How do all three albums fit together?

A. If you look at them as kind of a trio of albums, you can see the first one as being very much about acoustic work. The second one being more ensemble, with John (McVie) and Mick (Fleetwood) playing on quite a bit of that album. And somehow this new one seems to kind of overview everything I’ve been working on over the last six years, and maybe putting it in its best light. From a subject matter standpoint, something that was a great gift for me a few years back was having children. I had a lot of crazy girlfriends in the early days, and I kind of held off being a family member. So probably the occurrence of getting married and having kids relatively late at a time, I was ready for it was something that really enriched my outlook on the road and tempered it a great deal.

Q. What’s interesting is during your three solo CD run, Fleetwood Mac hasn’t released anything. Did you ever think that would happen?

A. Part of it is that the first two [solo albums] are certainly an outgrowth of me saying to the band just give me this time to do this. The other part of it is as a band Fleetwood Mac is a little bit chaotic on a political level, more so than most bands. A lot of bands seem to get their idea of what they want to accomplish in a given time together, and we’ve always been a group that everyone seems to want to do something different at a different time. So it creates longer gaps between mainstream projects.

Q. Over the past year, Saturday Night Live’s Bill Hader has been parodying you in a recurring sketch. How did you react when you first heard about it?

A. My reaction was sort of like, “Well, it’s kind of obscure, isn’t it?” At the same time, I took it as a compliment, because obviously someone was kind of tuned in to what it was I was about. And even the fact that the punch line of the skit was basically that he never gets to talk, that they introduce him and then he waits to be given a voice and he never actually is allowed to have the voice, there was a certain level that resonated with me. But the skit cracked me up. I thought it was great.

Q. Finally, for Gen Xers and younger generations, who came to know the Fleetwood Mac catalog from classic rock radio beating your iconic material to death, it seems as though your guitar prowess is either underrated or underappreciated. Why is this?

A. In the course of being in Fleetwood Mac you go with whatever your strengths are. There’s a level of subtlety to some of the contributions I’ve made that probably is easy to underrate if you want to look at it that way. Also, I’m not an Eddie Van Halen who plays over the top of something. It’s kind of hard to get a fix on what it is I do. So it’s not surprising that maybe there is a certain level of not really focusing on the “rock guitar” kind of thing as a clich . So yeah, there’s been a tendency to sort of not really hear what’s been going on in terms of what I’ve contributed, but sometimes that goes along with just doing your work properly. And if that’s the tradeoff, I’ll take it.
Nickslive at Tuesday, November 01, 2011
Share