Lindsey Buckingham – Songs From The Small Machine "If you are a fan, this is literally made for you" 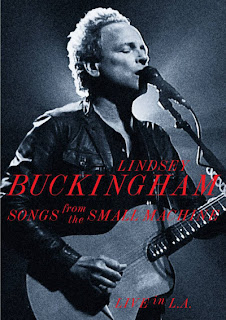 Songs From The Small Machine is not for the Fleetwood Mac fan.  This live document is for the diehards that Lindsey Buckingham has cultivated over the years, especially since he started releasing solo records and touring regularly about 5 years ago.

Having seen this tour when it passed through Atlanta, I can tell you that this is a perfect souvenir of the show. Buckingham has never been one much to change up his concerts and this DVD proves it. The set list has been consistently the same and even the dialog is virtually identical to every other night. The delicately worded explanations of his career and life path are tied directly into the songs chosen to be performed and shed light on his motivations, successes and failures.

Classic Fleetwood Mac cuts such as “Go Your Own Way”, “Tusk”, “Second Hand News” and “Im So Afraid” are given muscular, energetic treatments, but don’t feel as close to Buckingham’s heart as the truly emotional tunes that are included. This version of “All My Sorrows” (originally from 1992’s criminally underrated Out Of The Cradle) is absolutely one of the highlights of Buckingham’s entire career. “Turn It On”, also from Out Of The Cradle, is given a glorious run through as well.

Brand new tunes (there are no less than 6 from the 2011 album Seeds We Sow) stand up proudly next to the more familiar songs. “Illumination”, “The End Of Time”, “That’s The Way Love Goes” and “Stars Are Crazy” go a long way toward justifying Buckingham’s claim that his new album may be his best.

The only complaints that I have are minor. Many of the songs are performed in a lower pitch than the recorded versions and while I understand that it helps prevent vocal fatigue (as he has to sing all night every night during the solo tours), some songs are definitely affected. For example, the otherwise amazing, blistering acoustic take of Fleetwood Mac’s “Big Love” doesn’t feel quite as dazzling as the version from 1997’s live album The Dance and the only difference seems to be the pitch.

I also wish there were more songs from the previous album Gift Of Screws which contains quite a few of his best solo songs. Only “Treason” appears here and it’s almost a throwaway in this show.

Songs From The Small Machine is a simple continuation of Lindsey Buckingham’s art. It’s occasionally frustrating, but mostly brilliant. If you are a fan, this is literally made for you.