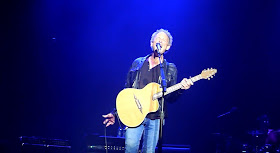 ROYAL OAK -- Lindsey Buckingham has plenty of good songs, both on his own and with Fleetwood Mac. He's a pretty fine singer, too.

But the nearly 1,200 who turned out to see him on Tuesday night (Nov. 8) at the Royal Oak Music Theatre mostly wanted to see Buckingham do one thing -- play guitar. And they certainly got what they wanted, a virtuostic display over the course of an hour and 50 minutes that was so dazzling and dynamically varied it could have caused one to ask silly questions like "Eric who?"

The 62-year-old Buckingham didn't waste any time showing off his dexterity, either. He played the night's first five songs solo, starting with the rolling, ethereal finger-picking of "Shut Us Down" from 2006's "Under the Skin," then playing his two biggest solo hits -- "Go Insane" and "Trouble" -- before dipping into the Fleetwood Mac canon for "Never Going Back Again" and a frenetic take on "Big Love." He could have satisfied the crowd in that mode all night long -- and did close the 19-song show that way with the title track of his latest album, "Seeds We Sow" -- but when he brought on his crack three-piece band, the fun really began.

Continue to the full review at the Oakland Press