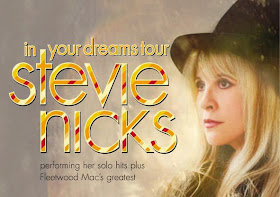 
Due to unforeseen circumstances relating to the change of production specifications for the Stevie Nicks concert, McManus Entertainment advise that the event will now be held at the WA Athletics Stadium in Mt Claremont on the scheduled date of Saturday 26th November.

Promoter Andrew McManus stated, “Although it’s never convenient to change the advertised venue, it is great that VenuesWest have opened the WA Athletics Stadium as a concert venue.”   “When I recently visited the site with a view to running the 80’s Dance Picnic Party featuring UB40 there, I was very impressed by the fabulous surroundings that I believe will give artists a great ambience to perform in.”  “When confronted with a series of logistical issues with some production changes for the Stevie Nicks concert I decided that the WA Athletics Stadium was the venue to go to.”

VenuesWest WA Athletics Stadium Chairman, Graham Partridge stated, “VenuesWest is delighted to have such huge international artists who have, between their band and solo projects, sold in excess of over 250 million records worldwide play the first outdoor music event in the Mt Claremont sports precinct.”

“The WA Athletics Stadium has a fantastic location and beautiful ambience for a concert and I’m sure the fans will love it,” he said.

“To mark this first event VenuesWest will be offering existing ticketholders free parking at our 4,000 plus onsite facility.”
Tickets to the show are still available thru Ticketmaster:  www.ticketmaster.com.au  136 100
Nickslive at Thursday, November 03, 2011
Share