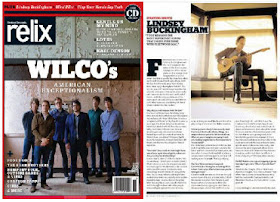 
Fleetwood Mac guitar guru Lindsey Buckingham was the chief songwriter for some of the most successful pop hits of the last 40 years, so it is strange to re-imagine him as a D.I.Y. artist. But that is exactly the route he’s taken on his self-released sixth solo album, Seeds We Sow, his first work since 1972’s Buckingham-Nicks LP away from Warner Bros. The spry 62 year old’s latest brings together the acoustic intricacies of his most recent material, 2006’s Under The Skin and 2008’s Gift of Screws, with the art pop jubilance of his underrated 1981 solo debut Law and Order to craft what many are considering his finest album outside the Mac to date.

What was the reasoning behind going your own way for Seeds We Sow ?
I’ve been on Warner Bros. for a long, long time and my deal with them recently expired. As you know, the large labels have become a completely different entity than they were 20 years ago; the whole thing has become so tiered and riddled with the boardroom mentality. And I didn’t fit into that. Even in decades past, my solo work was always looked upon with a certain skepticism by Warner Bros., you know? Of course, had it been Fleetwood Mac it might have been different, but that was the situation I found myself in. I did speak with a few independent labels. But at the end of the day, we just decided we could just go ahead and put it out ourselves, because it just seemed like all the things that they had to offer were things we could assemble ourselves and maybe do it with a little less politics.

Did seeing acts like Nine Inch Nails and Radiohead branch out on their own give you any hope of life beyond the majors for established artists?
Well, yeah on a certain level. Someone like Radiohead, who sold an awful lot of records as a band, they have a little more momentum to go on to be able to do that and to have expectations to sell. I think they always wanted me to get back to what was really important, which was Fleetwood Mac. But that’s something you get used to: its the small projects that keep you in touch with your heart and your aspiration to maintain the want to be an artist and not be a product, and that’s a nice place to be. And the outcome commercially is really a secondary thing. The people who are interested in what I do will gravitate towards this, and that’s all that is really important to me.

As someone who was in a band known for yielding bottomless budgets in the studio, what does going DIY mean to you? How liberating was the process?

Well, it isn’t the first time I’ve done that. I’ve done a lot of solo work where I’ve played most of the stuff myself, so the process wasn’t hugely different. I guess it was a little more completely one thing this time as it had been before. The actual idea of releasing it ourselves was not something we set out to do; it was just sort of a reaction to an apathy we were getting from the other side. It was just a way of trying to make an effective situation for ourselves.

“One Take” from Seeds We Sow has to have one of your most visceral guitar solos ever. Are you a big fan of shredding?

Well, I’ll tell you I am certainly a fan of Eddie Van Halen. He’s extraordinary, there’s just no doubt about it. What I think he had a bit of a problem with was making what he did work in the context of the band he was in. It’s hard to work [shredding] into the fabric of a song all the time, so I think in a way what he did might have worked even better in a slightly more sophisticated format. Maybe a fusion thing like John McLaughlin or Larry Coryell, where his skill was brought to bear with other people who could play against it more. In many ways, it always seemed like he was forced to play on top of whatever Van Halen recorded.

Andy Cabic of Vetiver recently cited Mirage as a major reference point for his latest album. What are your thoughts on younger rock acts finding inspiration in Fleetwood Mac’s 80s material?

It’s a little hard to be in touch with that. But yeah, hopefully you work your way into the fabric and that comes back at some point. It’s just nice when it comes back twofold, or when a certain amount of time goes by and it is still making sense to people. That’s gratifying.

We always hear about how influenced Fleetwood Mac was by the New Wave movement during the recording of Tusk, but what actual artists were you listening to at the time that were inspiring the sounds for the album?

Well, it wasn’t really any one act. I think what happened was that after Rumours, that album was so successful and, at some point, I think the success detached from the music and kind of became about the success, or about the voyeurism that was going on. And then in the meantime a lot of this stuff had come over from England, whether it was The Clash or Elvis Costello or Ian Dury. And it was just reinforcing my idea of what rock ‘n’ roll was all about and what one’s ideals should be about. When you interface that reinforcement with the fact that we were getting ready to be branded for good to make Rumours II, there was just this need and desire to draw a line in the sand and undercut the expectation to come up with more of the same. And, really, Tusk remains the most important album that I have ever done with Fleetwood Mac for me, because it sent me on the road that I’m still on in terms of my way of thinking [about music].

Are you a fan of the Peter Green era of Fleetwood Mac?

I was certainly a fan of the Peter Green days and I was a fan of Danny Kirwan’s stuff as well. I wasn’t really a Bob Welch fan, however. So yeah, sure, I was very aware of Then Play On. I have that album at home, actually. The funny thing about Fleetwood Mac, and again this is sort of a comment on what the record companies have become and what they were at one time is the confidence that [legendary former Warner Bros. president] Mo Ostin had in the group. After Peter left, they moved to L.A. and they had all these albums that were pretty much non sequitors from one to the other. Different lineups every time, and they really weren’t making Warner Bros. any money. And Mo had the autonomy and the intuition to say, “Well, I don’t know what’s going on with this band, but we’re gonna just let them stay here and maybe something will happen because they are an interesting act.” And then Stevie and I showed up. But it is that kind of nurturing and allowing for the ferment does not take place these days.

Any plans to finally re-release Buckingham-Nicks, which has been out of print for way too long?

We’ve talked about it. I think it’s just inertia that keeps it from happening. But hopefully that will happen in the fairly near future.

Congrats on your Les Paul Award. Did you ever get to meet and/or play with Les?

No, unfortunately, I did not. But I was greatly influenced by him. He was the guy who started the approach of what I do when I make solo work. He was playing all the instruments himself. He was the guy who was paving the way with, at the time there was no such thing as a multi-track, but when he was making those records with Mary Ford, he was bouncing back and forth from machine to machine building stuff up with a multi-track sensibility. He defined that whole way of recording.

Loved your appearance on SNL’s “What’s Up With That” skit. Did Bill Hader make a good doppelganger?

I think he did, yeah (laughs). When I first heard about it, I thought, “Gee, this is obscure.” But when I saw it, it was so funny because they had the exact outfit I had on from the last Fleetwood Mac tour. He had it down, it was great.

Full article can be found on the Relix Magazine website 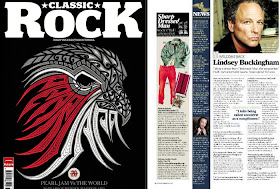 You'll find this article in the November, 2011 edition of "Classic Rock"