Published by @Nickslive at nickslive.blogspot.com for Fleetwood Mac News and Reviews: 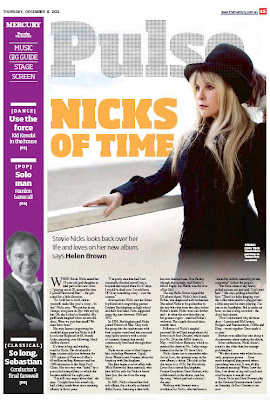 Stevie Nicks looks back over her life and loves on her new album, says Helen Brown

(This article appears in the December 8th printing of the Hobart Mercury (Tasmania).  Article was originally published in The Telegraph in June, 2011


WHEN Stevie Nicks asked her 15-year-old god-daughter to take part in her new video – “playing me at 30, around the time I joined Fleetwood Mac” – the girl asked for a little direction.

“So I told her to twirl, talk to yourself, make like you’re crazy – be me,” Nicks says. “We put her in my vintage, evergreen tie-dye with my top hat. Oh, she looked so beautiful. My girlfriends laughed when we saw the dress. Were we ever that small? We must have been!” She may lament outgrowing her youthful stage gear but Nicks is still a rock-star Rapunzel at 63, blonde locks cascading over billowing, black chiffon sleeves.

It’s been a long and winding road for Nicks. She developed a huge cocaine addiction between the 1977 release of Fleetwood Mac’s 40 million-selling Rumours and her 1986 admission to the Betty Ford Clinic. Her recovery was “aided” by a prescribed tranquilliser, to which she became addicted for eight years.

“I’m still very angry about that,” she says. “I might have met somebody, had a baby, made three more amazing albums in those years.

“I’m pretty sure that had I not eventually checked myself into a hospital and stayed there for 47 days, I would be dead now. I would have OD’D on something crazy – over the counter.”


Arizona-born Nicks met her future boyfriend and song-writing partner Lindsey Buckingham in high school and their first band, Fritz, supported many big stars between 1968 and 1972.

In 1974, Buckingham and Nicks joined Fleetwood Mac. They took the group into the mainstream with their poppier sound and into personal soap-opera territory with a series of romantic dramas that would continuously feed back through their lyrics.

Nicks wrote some of their biggest hits, including Rhiannon, Gypsy, Seven Wonders and Dreams, about her break-up with Buckingham.

She then began a secret affair with Mick Fleetwood (then married), who later left his wife for Nicks’s friend Sara (yes, the one from the song Sara).

In 1981, Nicks released her first solo album, the critically acclaimed Bella Donna, featuring a duet with her next famous beau, Don Henley (though she recently said Henley’s fellow Eagle, Joe Walsh, was the love of her life).

The day Bella Donna topped the US album charts, Nicks’s best friend, Robin, was diagnosed with leukaemia. She asked Nicks to be godmother to the boy who was born two days before Robin’s death. Nicks went one further and – in what she now describes as her greatest regret – married Robin’s widower. The couple divorced three months later.

Followers of Nicks’s tangled personal life will find songs about old lovers on In Your Dreams, which made it to No. 24 on the ARIA charts in May – well below Rumours, which reentered the charts at No. 2 after songs featured on the hit TV show Glee. Nicks claims not to remember who Secret Love, the opening song on the new album, is about. The clue is that she wrote it in 1976. But Everybody Loves You is about Buckingham. Former Eurythmic Dave Stewart, who collaborated on the album, sent her the song, “which just had a chorus”, she says.

Working with Stewart was a revelation for Nicks, who had been a “staunchly selfish, staunchly private songwriter” before the project.

“But Dave came to my house, pulled a poem out and said, ‘Let’s start here’,” she says, pulling a horrified face. “There’s a mike hanging over the coffee table and he’s plugged into a little amp and he starts playing. I’m just in the headlights. But in under an hour, we had a song recorded – the doors had opened.

“Now I understand why all those duos – Lennon and Mccartney, Rodgers and Hammerstein, Goffin and King – wrote together. Dave made it so easy.” Stewart even talked her into doing a documentary about making the album.

In her enthusiasm, Nicks doesn’t sound a day older than her teenage god-daughter.

“We shot scenes with white horses, owls, gorgeous gowns … Dave made a magical playground where everything was a toy. It was all like Christmas morning! When I saw the film, I sat down on my red couch and cried because it was all over.”

Stevie Nicks and Dave Stewart play at the Derwent Entertainment Centre on Saturday. In Your Dreams is out now.