As a member of Fleetwood Mac she captivated a generation, and Stevie Nicks brought her trademark ethereal feel to Wollongong. 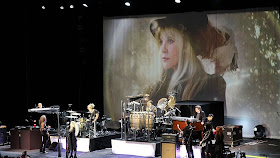 It was cold, windy and wet when the baby boomers fought for parking down by the beach and several blocks inland.

Many appeared to have arrived early enough to have quite a few drinks.

Surprisingly, many stayed outside drinking while Dave Stewart and his excellent band played a great set.
It was early though, they were playing a Eurythmics track when we arrived at 7:30pm.

Stevie announced at the start of her show that this concert tour was not a greatest hits show but to promote her 2010 album with Dave Stewart.  She then reassured us that there would be some hits interspersed with the new work.  The crowd was grateful.

Then, to sweeten us up, explained she'd never before visited Wollongong (which she correctly pronounced).
She praised the vista of entering from the escarpment: "Where the amazing ocean meets the mountain.
This is maybe where I find my house on the cliff".

"Yes!" we cheered, especially the Wombarra residents down in the $170 seats who probably thought more of the boost to their home prices than what sort of a neighbour Ms Nicks might really make.

A couple of new songs, the second with a video projection featuring Dave Stewart in black and young ethereal girls swirling around in swirly Nicks style dresses, cutting to images of a dark Stevie in black with very straight blonde hair.  The video background was quite distracting but reminded the crowd of Stevie's witchy persona.  In the flesh, she reminded us too of what she had been.

She wore a dark red, layered, ruched dress with tight bodice and the most amazing hair. Long, lustrous white blond locks had the 2011 Stevie, more beautiful than the tortured perms of the 70s and teased looks of the 80s but a little incongruous 30 years on.

The band launched into Dreams and the crowd sang along.

The expensive seats came alive with the lights of iphones: were they recording or waving their lighter app in the air?

Stevie was very chatty between songs and told how watching Twilight: New Moon in Australia had inspired the new Moonlight, a Vampire's Dream.  More video projections: Stevie with an owl, girl with unicorn, sweeping staircase, Dave Stewart, and a fanged dark haired male who looked to me like a young bearded Lindsay Buckingham.

Then off she went for a costume change, reappearing in a black dress very similar to the red one but still her signature style.  She also wore a gold shawl and I realised I'd nearly forgotten about Nicks' shawl work.

Gold Dust Woman was a crowd pleaser and Stevie used her shawl as a prop, holding it up to the light.
Dancing was never her forte, she shuffles, legs apart, around the stage occasionally slowly whirling around and wielding her shawl.

The next, a tribute to soldiers and their loved ones featured an image in the background of a younger Stevie draped in the U.S. flag.

A nice plug for legacy.com.au won the crowd over.

More talk from Stevie this time about knowing Edgar Allen Poe hundreds of years ago and reading him in high school, also "hundreds of years ago" she joked.  A Poe poem in a song, another song then another costume change...to a black Nicks dress with long chiffon tails from the sleeves.

That's what the crowd had come for! Nicks swirled witchily in her chiffon sleeves. Wollongong matrons danced and Stevie wailed. At 15 I wanted to name my first daughter Rhiannon.

Then another chat about family and a dedication to a couple of local familes and the band gave us Landslide.
Old photos of Stevie and her family: Stevie as a kid, a teen, a young star, her parents ageing, finishing on a final picture of her father on his motorised scooter made the projections really resonate. We had all thjckened around the middle since her halcyon days.

After a 10 min. (I kid you not) introduction to the band members Edge of Seventeen really rocked, Stevie now in an ivory dress, again gathered and ruched with frills for her to wave in her left hand as she wielded her mike stand which trailed black leather straps and silver chains.

Before she departed Ms Nicks pulled her hair back and a minder grabbed her waist as she leant into the crowd shaking and clasping hands right across the front of the stage.

She shared her stories and music and tried to include us with many local references.  She talked a lot and summed up her motivation for relaunching her career: she doesn't want to be a relic.

We liked her and her stories of how she rose from waitressing to travelling on Fleetwood Mac's private jet.
I noticed how some of the local ladies had made an effort in the Stevie Nicks "look" area after the show.
I spotted so many shaggy blonde dos, even crimped hair and, in McDonalds car park an exquisite handkerchief skirt in white tulle and blue fabric.