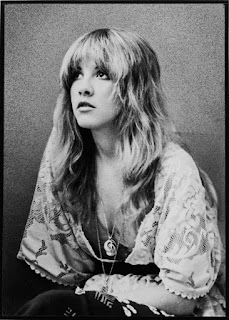 Published by @Nickslive nickslive.blogspot.com
Mick LaSalle today listed 30 people (so far) he thinks are underrated.... Here's what he had to say about Stevie.  Check out his full list HERE and contribute if you think he's left someone out >  (Lindsey Buckingham Guitarist/Chrstine McVie?). He's shooting for a list of 50-75 people.

"Stevie Nicks: When I was a teenager photos like the one above would make my jaw drop, and I'd just stare with devouring lust. Stevie Nicks looked like what everyone wanted their girlfriend to look like in 1976. But as a result of being so pretty, she was always written about as the lightweight of Fleetwood Mac. Lightweight? She was the best songwriter by far and put the others in the shade."