Hold on to your microphones... Stevie's American Thunder Music Festival appearance will be broadcast on HDNet
March 18, 2012 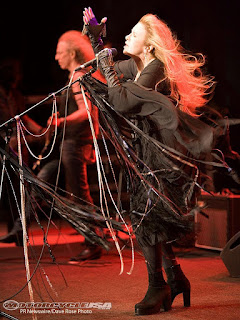 The inaugural American Thunder Music Festival, a benefit concert for the Bob Woodruff Foundation, made history in front of an audience of over 50,000 fans on August 11, 2011 in Sturgis, SD when Jeff Bridges hosted and performed along with Stevie Nicks and John Fogerty.

Stevie Nicks performed in the midst of a howling thundering windstorm and tornado warnings.  The dramatic performance of Stevie performing "Soldiers Angel", one of 4 songs she performed that day, was captured on film from the side of the stage and published on youtube shortly after.

This will be a show you do not want to miss!  The images and film piece of Stevie performing in that wind storm have already gone down in the history books as some of the most dramatic of her career!  Just one more moment from this past amazing year!  The video below of her singing "Soldiers Angel" backs it up.

In hindsight it's a little scary watching the footage knowing what happened in Indianapolis during the Sugarland concert and the outdoor stage just a few days later.  You can see the nervousness in Stevie's handlers on the side of the stage - but Stevie soldiers on!  Thankfully nothing happened and we are left with another great performance - and one to look forward to in the next while on TV.

AIR DATE
American Thunders broadcast partners include HDNet which have the show listed and airing March 18, 2012.