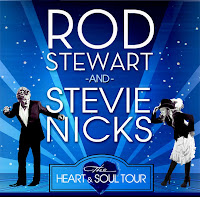 “I couldn’t be happier to be back on the boards with Stevie this summer,” Stewart said in a release “We had fantastic fun on the road together last spring and I’m thrilled at the chance to bring it to new cities and fans this summer.”

The pair's previous tour featured 3-hour performances, with individual sets by Stewart and Nicks, plus a handful of duets.

In a career spanning five decades, Rod Stewart has amassed an estimated 250 million in album and single sales and an incredible 16 Grammy nominations.  In April he will join the elite list of artists who are 2x Rock and Roll Hall of Fame inductees (as a solo artist and soon as a member of the seminal 60s rock band, the Faces). On March 24, he will return to Las Vegas for an 8-concert-run of "The Hits" - part of his immensely popular first residency at The Colosseum at Caesars Palace.

Stevie Nicks is a multi-Grammy Award Winner as a solo artist and member of the legendary Fleetwood Mac and a Rock & Roll Hall of Fame inductee.  Her new CD "In Your Dreams" debuted at No. 6 on the Billboard Top 200 Album Chart and has received glowing reviews from numerous outlets, including US Magazine who declared it "the best album of Nicks' four decade career."