"There's Much To Sing About" - Stevie Nicks 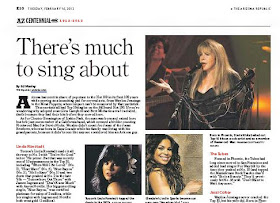 From the February 14th issue of The Arizona Republic.

Arizona the state turns 100 today.  Newspaper dedicated to all things Arizona... Listing out all the music celebrities from Arizona that were a success.

Arizona has sent its share of pop stars to the Hot 100 in its first 100 years while serving as a launching pad for several acts, from Waylon Jennings to the Meat Puppets, whose impact can't be measured by that yardstick.

Stevie Nicks
Born in Phoenix, Stevie Nicks took "Dreams" to No. 1 with Fleetwood Mac. But as a solo act, her highest-charting single was the one that launched her as a solo artist, "Stop Draggin' My Heart Around." Recorded with Tom Petty and the Heartbreakers, it peaked at No. 3 in 1981. Her other Top-10 hits were "Stand Back" (No. 5) and two songs that were certified gold -- 1981's "Leather and Lace" (a duet with Don Henley that peaked at No. 6) and "Talk to Me" (No. 4).