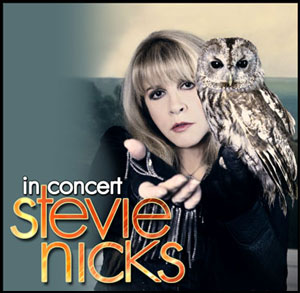 
We are excited to provide you with the opportunity to purchase tickets to the Friday, July 6, 2012, "Stevie Nicks in Concert" at Fox Theatre before they go on sale to the general public. The presale begins Thursday, March 29th, 10 a.m. Please note there will be an eight (8) ticket limit per person.

This is an online opportunity only, and no phone orders will be accepted. Please order as quickly as possible as supplies are limited and may be exhausted prior to the conclusion of the presale.

Stevie Nicks' first studio CD in ten years "In Your Dreams" was released to critical raves and debuted in the Top Ten on Billboard's Top 200 Chart.

As a solo artist and member of Fleetwood Mac whose "Rumours" CD was one of the biggest selling albums of all time, Nicks' extraordinary career includes multiple Grammy awards, gold and platinum records, induction into the Rock and Roll Hall of Fame and unforgettable performances across the stages of the world for over three decades.

As a legendary performer and songwriter, Nicks has penned several Fleetwood Mac classics including the timeless "Landslide," "Dreams," "Gold Dust Woman" and "Rhiannon" along with her solo hits beginning with her five times platinum debut "Bella Donna" and unforgettable solo singles such as "Edge of Seventeen," "Leather and Lace" and "Stand Back." Her previous studio CD, the Grammy nominated "Trouble in Shangri-la" was released in 2001. Nicks' "Live in Chicago" DVD and "The Soundstage Sessions" CD were both released in 2009.
Nickslive at Wednesday, March 28, 2012
Share