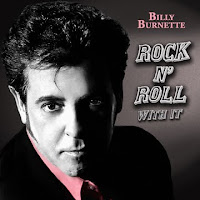 Billy Burnette (former Fleetwood Mac member '87 to '95) has released a new album titled "Rock N Roll With It".  His latest single, the album title track, has recently been released to 100's of Triple A stations around the US.  Check out the Rockabillyblues website for an extensive listing of stations sent the track and if one happens to be in your area - request they play the song.

Billy's history with Fleetwood Mac goes way back even before he joined the band officially.  He first joined Mick Fleetwood's "The Zoo" in the early 80's and released one album "Shaking The Cage" with them.  He wrote "So Excited" with Christine McVie which appeared on her 2nd solo album in 1984 and also appeared with Christine live on the taping of "Christine McVie The Video Album".  He backed up Lindsey Buckingham during his Saturday Night Live appearance in the early 80's plus did a duet with Stevie on "Are You Mine".  He officially joined Fleetwood Mac in 1987, prior to the "Tango In The Night" world tour.  With Billy in the band they released "Greatest Hits" in 1988 "Behind The Mask" in 1990" and "Time" in 1995 - all of which Billy appeared on.  He also contributed to John McVie's only solo album in 1992 "John McVie's Gotta Band".

Here's a recent interview with Billy.  He talks about the all the artists he's played with + how his involvement with Fleetwood Mac came to be. Rockabillyblues


Here's Billy live in action with Fleetwood Mac at the Cow Palace in San Francisco on the Tango In The Night Tour.