Magic was in the air on American Idol


Magic was in the air on American Idol tonight. 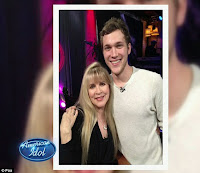 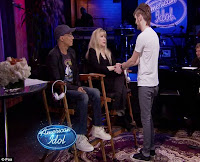 As Aerosmith frontman Tyler noted, the [night] 'was a magical mystery tour of over-the-top talent and emotion.'


Both were found in the dynamic between 21-year-old Phillip Phillips and guest mentor Stevie Nicks.

The Fleetwood Mac singer was so enamoured with the Georgia boy that she even said, had it been 1975, he would have been part of her band.

It was the highest form of praise anyone could receive from a musical legend on an evening where the Idols honoured their own Idols.

The smitten singer told Phillips: 'Had it been you, me and [fellow Fleetwood Mac singer Lindsay Buckingham] in 1975, Mick Fleetwood would have asked all three of us to be part of Fleetwood Mac. You're that good.'

Hollie sang "Jesus Take the Wheel" by Carrie Underwood. And Nicks, a guest coach this week, pleaded with her during practice to better connect with the song. Nicks shared with Hollie that her mother just died two months ago, and Hollie's song, which tackles a heartbreaking family drama, needed to relate to those powerful emotions.

"It doesn't matter about your big voice," Nicks, fighting back tears, whispered to Hollie during her practice session. "It matters about your heart."

After 18-year-old Hollie sang her practice number, Nicks said, "When she sang I started to cry. I believe her, and I think the world will believe her."

Hollie said it meant a lot that her practice session turned personal with the iconic solo artist and former Fleetwood Mac lead singer.

But after the live performance Wednesday on Fox, the judges were mixed in their reviews.

"It's always dangerous taking on one of those songs from (past) Idol winners," judge Randy Jackson said. "We often say don't do that. But I think you really did a good job. ... I was impressed."

Judge Jennifer Lopez appeared to like it most: "I'm gonna have to disagree with Randy here, because to me that was one of your best," she said. "We've heard (Hollie) sing big notes, we've heard her be up in the stratosphere, but like Stevie said to her it matters about your heart. I felt she connected emotionally."

"I'm not gonna mess with Jesus or Carrie," Tyler said. "I heard her emotion and I felt it. I just wish you'd sing a different song. It was just OK for me."

During her post-performance interview with host Ryan Seacrest, Hollie said, "Every time I look back at that (tape of her practice session with Nicks) I get emotional. She was so amazing, and it just all took over my body at that time."

Nine contestants remain. One will be eliminated tonight at 7 p.m., according to America's lowest vote total, unless the judges use their save.

Stevie Nicks told Colton Dixon not to let anyone tell him to cut his signature mohawk-style hair for the rest of the season. Colton was glad someone finally understood his connection to the hair, and hoped to get his musical style across by singing the Christian worship song “Everything” by Lifehouse. The performance featured a string section and continued Colton’s preference for making obscure song choices. Steven said Colton was “a dream come true” for an “Idol” judge. Jennifer was really moved by Colton’s delivery, and Randy said Colton had believability and could win the whole competition.

Skylar Laine is clearly influenced by Miranda Lambert, so it was no surprise she went with the country star’s fiery hit “Gunpowder and Lead.” Stevie Nicks actually sang backup for Skylar in the mentor session and told her to really deliver the story of the song. Jennifer said Skylar brought unbridled energy and thought it was a perfect song for her. Steven said it was “over the top,” and Randy loved that Skylar showed off her vocal range at the end.

The first trio of the night was made up of Colton, Elise Testone and Phillip Phillips. They paid tribute to this week’s mentor Stevie Nicks, singing her Fleetwood Mac classic “Landslide” before kicking it up a notch with the solo hit “Edge of Seventeen.” The medley ended with a reading of Fleetwood Mac’s “Don’t Stop.” Steven called the trio “most excellent.”