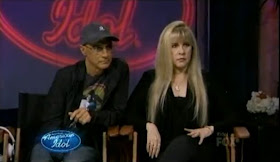 WOW What a Night!!

Stevie Nicks was absolutely wonderful tonight on American Idol. So personal... So caring... and I think the contestants that were taking advice from Stevie and Jimmy really felt that... I did!

Here are 2 mentoring segments from the show.  It was a two hour show, Jimmy and Stevie were interspersed amongst the live performances hearing each song the contestant was going to sing... They would critique them, give them pointers, encouragement - and Stevie even added her own voice to a few of the segments helping the idol work out the song...  It was great and really cool to see.  The kids all seemed so blown away by what Stevie had to say... and were so appreciative.  It was cool to see Stevie in action.  We've all heard the stories on how she likes to mentor the younger generation of singers and artists but that's never been for public consumption... So it was nice to hear her with these young artists.  Stevie could easily be the resident Mentor on Idol!

Here's a couple of examples.  First up is Skylar and then Hollie who sang Carrie Underwood's Jesus Take The Wheel - which was really a touching moment for Stevie when in trying to get across the emotion that needs to be in the song to make it believable explained that she just lost her mother a couple of months ago and wants to hear Hollie's heart in the song! Stevie, then listening to Hollie sing, began to tear up.


MORE FROM THE SHOW:
'American Idol': Stevie Nicks tells Phillip Phillips he could have joined Fleetwood Mac in 1975
PopWatch
Phillip Phillips rings like a bell through the night. And wouldn’t you love to love him?
Stevie Nicks would. This week’s American Idol mentor (I know!!!) told the 21-year-old from Leesbug, Georgia that if he had been friends with her and Lindsey Buckingham in 1975, “Mick Fleetwood would have said ‘I want all three of you to join Fleetwood Mac.’ No doubt in my mind, because you’re that good.”
“And last, but not least, he’s gorgeous,” she added.
American Idol' Recap: Stevie Nicks Crushes on Phillip Phillips
Hollywood Reporter
Guided by the expertise of the Fleetwood Mac legend, the remaining nine finalists face off during a night of impressive, emotional performances.
Full Article
'American Idol' Top 9: Stevie Nicks' mentor week is pretty strong
Stevie Nicks is the "American Idol" guest mentor for the Top 9, which is seriously awesome. Diddy schmiddy. Stevie Nicks is awesome.
Full article at Zap2it
Tomorrow night it's UP ALL NIGHT on NBC!!
Nickslive at Wednesday, March 28, 2012
Share