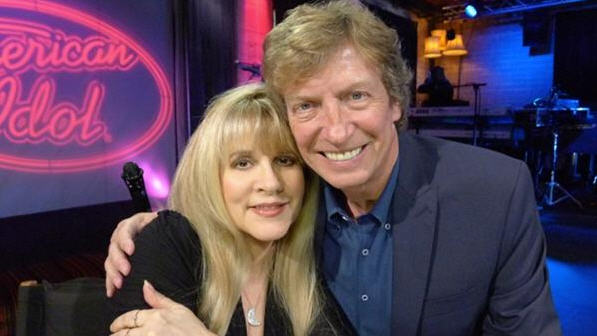 Stevie Nicks is the mentor for next week’s American Idol 11 Top 9.
(Pictured with NNigel Lythgoe)
The theme for next week is “songs from your idols” which include Mariah Carey, Miranda Lambert, Led Zeppelin, Lifehouse and Daughtry.

'American Idol': Stevie Nicks to Mentor Top 9
Enlisted by old pal and in-house mentor Jimmy Iovine, the iconic Fleetwood Mac singer will guide the season 11 finalists as they perform songs by their idols.

It looks like Jimmy Iovine is hard at work enlisting artist friends to take part in this year's American Idol. The latest to join as guest mentor: singer, songwriter and Fleetwood Mac frontwoman Stevie Nicks, who will guide season 11's remaining nine finalists on next week's episode. The theme: songs from the contestants' Idols.

Only a couple Idols tweeted that they got to spend time with iconic vocalist, including 16-year-old Jessica Sanchez, who expressed her excitement over having met the one and only Stevie. Others, like DeAndre Brackensick were a bit more coy about who was guiding them. "ive [sic] got to say that our mentor this week is amazing," he wrote.

Of course, Iovine and Nicks go way back -- the Interscope Geffen A&M chairman is not only a decades-long friend, but he (along with Tom Petty) produced her breakout solo album, 1981's Bella Donna, along with subsequent releases The Wild Heart (1983) and Rock a Little (1985). It's also fairly well-documented that the two dated for a stretch in the 1980s. More recently, Iovine praised Nicks and her place in his life when he was honored by the Recording Academy's Producers & Engineers Wing before last month's Grammy Awards.

Tune in to Fox on Wednesday to see how the Top 9 fare.