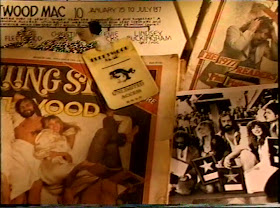 Ah, my dear nephew, I thought those were your steps I heard. Allow me to pause this Mirage concert bootleg; may I ask to what I owe this unexpected visit? Surely you haven’t come to my basement hideaway to spend the evening hours with your doddering old uncle, who, as you have made abundantly clear so many times before, has nothing at all to teach you—

But, wait, what’s that you say? Do my ears deceive me? Has my headstrong nephew at long last come to his senses and crawled back to hear his uncle’s Fleetwood Mac concert stories?  Full article

Tulsa's Channel 8 is giving away tickets to Rod Stewart and Stevie Nicks beginning on April 26th and April 27th... Watch their 10 p.m. newscast to enter and win.

It was May of 1984, and young punk Frank Campagna was racing around Dallas in his '75 burgundy Chrysler Cordova – the model with the real Corinthian leather. His mission: to find some green tea for Stevie Nicks.

"It was before there was Whole Foods or any of these organic places," he explains. "Hell, I'd never even heard of green tea before that. But that's what she wanted, and it was the only thing she drank."