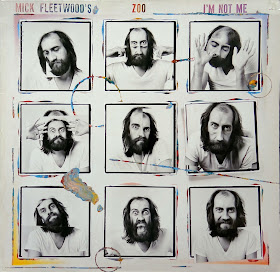 Though I'm Not Me, the 1983 album by Mick Fleetwood's Zoo is commonly thought of as a Mick Fleetwood solo record, it really was the product of a band, and a helluva band at that. Aside from the drummer — who lays down the primal, bedrock rhythms for which he is famous — the denizens of this Zoo include Billy Burnette and Steve Ross on guitar and vocals, session bass player supreme Roger Hawkins and, on background vocals, none other than Christine McVie and Lindsey Buckingham (the band got its start backing Buckingham on a Saturday Night Live appearance). Though produced by Richard Dashut, producer of Rumors and Tusk, I'm Not Me was almost the anti-Tusk, a low-key affair showcasing the considerable singing and songwriting talents of Burnette, Ross and Hawkins. Given the talent assembled and the fact that it scored a hit in "I Want You Back," it's odd that this engaging, infectious album has never been out on CD. The Real Gone reissue includes notes by Scott Schinder that place I’m Not Me in its proper Fleetwood and ‘Mac context.

Pre-order the album - Available May 22nd

Tracks:
Angel Come Home
You Might Need Somebody
Tonight
I Want You Back
I’m Not Me
State of the Art
Tear It Up
This Love
I Give
Just Because
Put Me Right