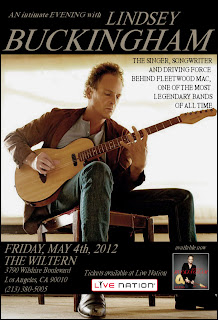 Lindsey Buckingham is performing a rare solo acoustic performance at The Wiltern on May 4th. Tickets are on sale now at Live Nation.  Enter to win a pair of tickets to the show from K-EARTH 101!

b) To participate in the Promotion, you must log onto Kearth101.com and follow the links and instructions to enter during the Promotion Period and submit your first name and last name, complete address, city, state, zip code, telephone number, date of birth and a valid email address in the online entry form. Only one (1) internet entry per person and one (1) internet entry per email address is permitted.

2. ELIGIBILITY RESTRICTIONS
a) The Promotion is open to all persons who are 18 years of age or older and who reside in the following Southern California Counties: Los Angeles, Orange, Riverside, San Bernardino, San Diego and/or Ventura.

3. PRIZES
a) Two (2) prizes will be awarded in this Promotion. Each prize includes two (2) tickets to see Lindsey Buckingham at the Wiltern Theater in Los Angeles CA at 7:00 pm PT on May 4, 2012. The Approximate Retail Value of each prize is $60.00.

The above are the important bits.. Full set of rules here