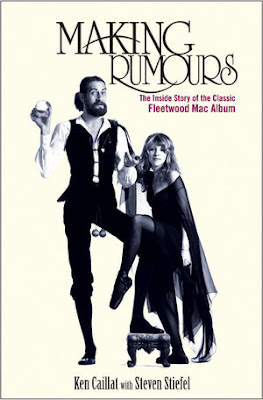 
What if I told you this book was full of tech talk, read like a manual and was filled with arcane details…would you read it anyway?

Ken Caillat was smart enough to get a cowriter, unlike Carole King. And he’s not afraid to sling shit, some of the stories about Lindsey Buckingham will horrify you, like how he punched his girlfriend in the face. But what keeps you reading are the memories… Of when music was the most powerful medium on the planet, when it drove the culture and the highest personal achievement was international rock star, not banker.

I’m not saying if Fleetwood Mac started today they wouldn’t make a deal with Pepsi, wouldn’t go on "Idol", but it was a completely different era, that stuff was anathema, it was all about the MUSIC!

Ken Caillat remixes a single another engineer flubs and suddenly he’s driving his Audi up the coast to the Sausalito Record Plant, to record a follow-up to an album that’s not yet a hit. Sure, what Ken references as the "white album" had impact, but it wasn’t until after they started recording during the NoCal winter that it went nuclear, and the band’s manager/attorney Mickey Shapiro called and said if they could record just one more hit album, they’d be set for life!

But Mickey was right.

John McVie drinks so much he has to leave early, but determined to get his bass parts right he shows up before everybody else, to rerecord them.

Everybody looks down on Stevie Nicks because she doesn’t play an instrument, not knowing she’d eventually become the biggest of the bunch.


Want something interesting to read every couple days on the music industry from Bob Lefsetz perspective?  Subscribe to his newsletter The Lefsetz Letter