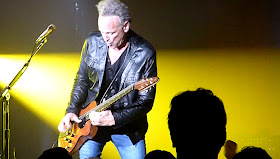 Last fall the Fleetwood Mac frontman played UCLA's Royce Hall not long after the release of his latest solo album, Seeds We Sow. But where that gig featured a backing band, tonight he'll go it alone in a show billed as "An Intimate Evening With Lindsey Buckingham." Like the two late-'00s solo discs that preceded it, Seeds warrants the intimate-evening treatment. It's full of complicated, acoustic-guitar music with weird chord progressions and creepy-whisper vocals. (In the unlikely event that you haven't dug out Rumours in a while, re-listen to "Never Going Back Again" to find out where Fleet Foxes and Iron and Wine are coming from.) Expect to hear recent stuff at the Wiltern, along with stripped-down renditions of Fleetwood favorites.
—Mikael Wood LA Weekly - Livenation Tickets

An intimate one-man show by the guitarist, singer/songwriter/producer and Grammy award winner best known for his tenure with Fleetwood Mac. Buckingham, a guitar virtuoso, will showcase his distinctive picking style and instantly recognizable voice. He will perform songs from his recent album Seeds We Sow and a combination of favorites from his previous solo albums, along with a variety of Fleetwood Mac classics. $36-$61. Fred Kavli Theatre, Thousand Oaks Civic Arts Plaza, www.toaks.org, 2100 E. Thousand Oaks Blvd., Thousand Oaks. - Ticketmaster
- By Shane Cohn and Michel Cicero - Ventura County Reporter

Fair warning: Buckingham’s set might be heavy on the pseudo-world crap that the legendary guitarist has been trying to pass off lately. However, for die-hard Fleetwood Mac fans, this show will be worth the ticket price just for the old gems like “Never Going Back Again” and “Go Your Own Way” that will inevitably be peppered into the evening.
By Mike Flanagan - Boston.com