Review: Lindsey Buckingham Is Gracious and Youthful at the Neptune Theatre on Saturday Night

Lindsey Buckingham appeared on stage at the Neptune on Saturday night in a black leather jacket, ankle boots, and skinny jeans. 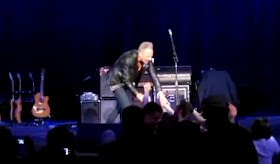 Buckingham does everything with flair. He shakes his head as he sings, like he's willing the notes out. He paws at his guitar strings like a dog, picks at them like a pianist. He pumps his guitar up in the air and soaks in the applause. After playing a few midtempo songs--2006's "Cast Away Dreams"; Fleetwood Mac's "Bleed To Love Her"--someone in the audience shouted, "kick it up a notch!", which was rude, but as if on cue Buckingham switched to electric for "Come" and heated up the room bawling out the chorus ("Think of me sweet darling every time you don't come/Can you feel the fever?").


Live Review: Lindsey Buckingham at the Neptune Theatre
Fleetwood Mac's Main Man Pares Down to the Essentials for an Awed Seattle Crowd


If the name Lindsey Buckingham means nothing to you, and yet you are a human possessed of the ability to hear, I can just about guarantee that his unique voice and brilliant pop songcraft are in fact quite familiar to you. As a key songwriter and singer in Fleetwood Mac from 1975 on, Buckingham penned and sang some of the most recognizable and enduring tunes to grace the FM rock radio airwaves, including “Go Your Own Way,” “Second Hand News,” and “Never Going Back Again” (and that’s just from side 1 of Rumours).

Buckingham has had a relatively prolific solo career for decades – during Saturday’s concert he referred to it as the “small machine” to Fleetwood Mac’s “big machine” – probably the most recognizable product of which for the casual listener would be “Holiday Road,” the theme from the 1983 movie “National Lampoon’s Vacation.” That little pop gem aside, Buckingham’s solo career has generally been about experimenting as an artist and letting himself be creative without worrying about hits. He spoke on Saturday about the importance of having these two elements in his life, and it was plain that his work with the “small machine” brought him much joy. By all appearances the audience at the Neptune was here not to witness a slice of the big Fleetwood Mac machine, but to revel in the brilliance of the small machine on a small stage. And revel we did.

Shows I’ll Never Forget: Lindsey Buckingham, May 19, 2012
by Glen Boyd
Something Else Reviews


At Neptune Theatre, Seattle, Washington: “The small machine appears to have just gotten a little smaller,” was how singer-songwriter, and Fleetwood Mac guitarist Lindsey Buckingham described it during the Seattle stop of his current solo tour this past Saturday night at the Neptune Theatre.

Buckingham returned to this topic again and again during the show. Comparing what he does with the “big machine” of Fleetwood Mac, to the more left-of-center music he plays as a solo artist — both with smaller groups, and now, as a virtual one man band — Buckingham talked about how the two seeming extremes are a necessary compliment to one another. Performing songs from a setlist which drew equally from his solo work (from “Trouble” to the recent “Seeds We Sow”), his platinum smashes with Fleetwood Mac (“Go Your Own Way,” “I’m So Afraid”), and even the relatively obscure, pre-Fleetwood Mac Buckingham-Nicks album (“Stephanie”), Buckingham made a very convincing case for how these individual pieces form a more complete artistic whole.