Brace Yourself - Lindsey Buckingham "Rock Away Blind" Live in NYC 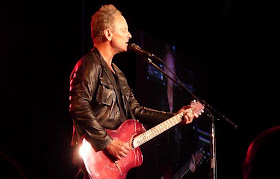 Wow!... On the second night at The B.B. King Blues Club last night in New York City, Lindsey takes a detour away from his usual setlist and treats the audience to "Rock Away Blind" by request!  "Rock Away Blind" has never been played live except for once instance back on November 4, 2011 during his appearance at the 92Y event.  The song is a great album track, one of my favourites and sounds pretty fantastic for an unrehearsed moment up on stage... Lindsey says at the end of the video that his sound man is probably going "what the fuck was that?"

A couple of other things to note is Lindsey says at the beginning of this video that he's not ready to do it yet but he's thinking on the next leg (of the tour) he'll start taking requests.  That would be really cool if he did and would really shake up the live show setlist.  Whether his remark on "the next leg" is confirmation of more dates beyond June 16th, I'm not sure, but it looks like it's part of his plan and backs up what was in earlier press releases saying more dates around the country were to follow.

Thank you to those that requested Lindsey play this... and a BIG thank you to tgrpaws for capturing it on film!

Also, check out "Come" from the first night at B.B.Kings here


Next up for Lindsey is tonight in Ridgefield, CT at The Ridgefield Playhouse. Tickets available here
Nickslive at Wednesday, June 06, 2012
Share