Lindsey Buckingham does too many things too well for one of his talents not to go overlooked. Millions know him as the singer-songwriter of the Fleetwood Mac smash “Go Your Own Way,” and fans credit him as the driving force behind the band’s fractured epic, Tusk. But one thing you don’t hear much about is Buckingham’s guitar-heroism—a shame, since the man’s pickless playing is straight-up deadly.

LINDSEY BUCKINGHAM
The State Theatre of Ithaca - Friday, June 8th
Text: state to 77000 for your chance to win tickets! 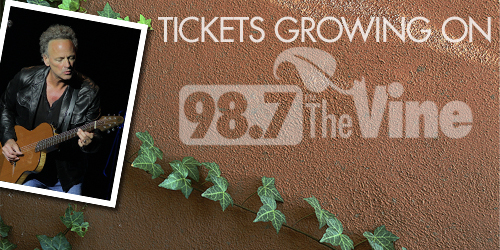 98.7 The Vine wants you to see Lindsey Buckingham, the iconic guitarist and male singer of Fleetwood Mac, Grammy winner, producer, and Rock and Roll Hall of Famer in Ithaca at the beautiful State Theatre in a solo engagement.  They want to get you rockin' with Lindsey, so they've got tickets growing on The Vine just for you!

Tickets for the show are still available here

Mick Fleetwood's restaurant on Front Street in  Lahaina, HI on Maui is gearing up to open this year... They've just appointed the General Manager for the establishment and applications continue to be accepted for an assortment of positions... If interested, submit your resume via whoyouhire.com.

CONTEST:
Currently, Fleetwood's is running a contest, which actually started a while back... but they are continuing on with it... It's simple... Here are the details:

The question:
HOW MANY SEATS DOES Fleetwood's on Front St. have on the rooftop? (white building in photo)

The Prize:
Winner will receive dinner for 4 and a Meet and Greet with the man himself, Mick Fleetwood!

Not a bad prize for simply submitting a guess!!