New Merchandise!
A lot of you are interested in seeing what's new in merchandise this year... Well this kinda sums it up.  Some pretty unique looking items up for grabs... You have a choice between nine T-shirts, black Hoodies, Hats, Magnets plus the In Your Dreams CD.  I particularly like the shirts with a picture of Stevie's own drawing on the front and the one with her and the owl.

Get ready to spend! 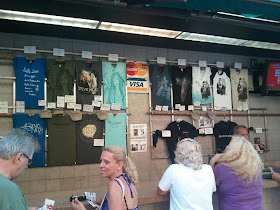 Final Bow at Jones Beach
Noticeably absent from the band this year is Lenny Castro, so no percussion player!  Noticeably added to Stevie's band this year is Brett Tuggle (next to Waddy) taking the place of also noticeably absent Ricky Peterson who played Keyboards and has been with Stevie on her last few tours.  Brett was last seen backing up Lindsey in 2011 on his Seeds We Sow Tour... and when not on tour joins Waddy at The Joint in L.A. for some live gigs. Not shown is Al Ortiz... I'm assuming he's standing next to Darrell Smith on the far left.