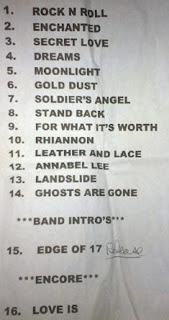 
Stevie kicked off her first public live performance of 2012 in Wantagh, NY at Jones Beach Theatre on Long Island. She opened the show with Rock & Roll which is a big change.  The song normally takes it's place as the second to last song in the encore set, so it's a nice change to see her open with it.  I like the fact that she comes out blasting with a rocker!  The audience is already excited to see her so a really rockin' tune or something up tempo just sends them over the top. Previous sets in the last few years have opened with either Stand Back or Fall From Grace.  Stevie came out in her typical trademark platform boots dressed in all black with a Feather Boa attached to her wrist.  She didn't appear to change from the black all night, only adding different pieces like the Gold Dust shawl, the Stand Back shawl and of course the Rhiannon top. At the end with Edge of Seventeen she pulled out the white.

The setlist tonight didn't deviate too much from what her setlist was last year except she shuffled around the tunes and made two additions with Rock & Roll and Enchanted, which hasn't been in the set for awhile. Steve Real was back for his duet with Stevie on Leather and Lace... I read and was told that once again Stevie charmed the audience with her humour. During her intro to Annabel Lee she again eluded to her affair with Edgar Allan Poe saying she was hanging with him back in the 1800's, he was married, but that never stopped her before.  It was also said that Stevie ended the night emotionally with Love Is with tears in her eyes thankful to and grateful for the enthusiastic audience.  Jones Beach has a great stage, so the Edge Walk was intact... Photos below.

Here's a run down of the songs in the set... Big thanks to @Steviessara on Twitter for a copy of the setlist. This was @Steviessara's first front row experience at a Stevie show, and she won the tickets to boot!  All in all saw a lot of positive responses to tonights show - which is great for Stevie and her first night back.  Next stop is Holmdel, NJ Saturday night where she'll be just as great!

Thanks to everyone that tweeted or sent me messages about the show.. It was fun read 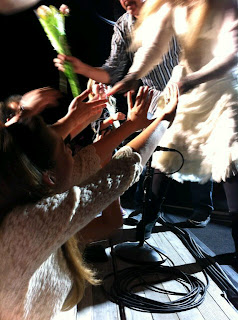 Photo on right by @theonewithally
Nickslive at Saturday, June 30, 2012
Share