When he plays for Fleetwood Mac, Lindsey Buckingham always seems like the intense lead guitarist whose fervor is about to bubble over at any moment. 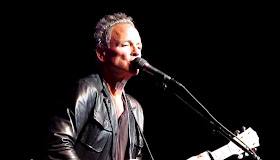 Playing alone and acoustic Sunday at Musikfest Café at SteelStacks in Bethlehem,  Buckingham was precisely that: a fervent singer and guitarist who performed every song with such intensity that it did, at points, boil over.

Read the rest of this great review on the original site »

PLUS.... A little more info on that Fleetwood Mac compilation/tribute album that's been surfacing little by little over the last couple of years.  Just to refresh your memory, Michelle Branch posted on twitter back in February, 2010 that she was in the studio working with Waddy Wachtel on the Fleetwood Mac song "Say You Love Me" with Stevie producing... saying it was for a Fleetwood Mac Tribute...

Jump ahead to May, 2012 and classic rock station B102.7 reported that Trixie Whitley contributed to a song that Marianne Faithfull had recorded for the album and that it looked like it was coming out this year.

And just today... Paste Magazine posted an interview with former Shutter To Think frontman and Baby ringleader Craig Wedren and when asked by Paste was was next for him he said, "I’m doing a Fleetwood Mac cover song with Annie Clark from St. Vincent. for this Fleetwood Mac compilation which I guess is coming out this summer."

So even though this project appears to be coming together... it's still very much a bunch of bits and pieces of info that don't make a lot of sense right now... Some obscure non-mainstream artists (aside from Michelle) seem to be associated with this project.  Not sure if it's leaning towards country, or alternative or what... We shall see.
Nickslive at Monday, June 11, 2012
Share