Buckingham Nicks were fairly huge in Alabama back about the time Lindsey and Stevie joined Fleetwood Mac at the beginning of 1975.  Here's what Lindsey had to say about Birmingham, AL: 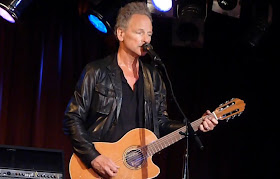 "We had this very strange area of localized success....a little pocket of Buckingham Nicks- mania! Of the few gigs we had done two were in Birmingham, Alabama; the first was opening for MOUNTAIN, and the second was opening for POCO...and for some reason we really caught fire in that town. Some DJ’s picked up on the album, and it was a huge success there- so we went down a storm! If nowhere else in the world, Buckingham Nicks were stars in Birmingham, Alabama..”

“It so happened that our last gigs as Buckingham Nicks was at Birmingham just after we’d joined Fleetwood Mac. As a result of our two previous gigs we were booked as the headline act, and the lineup was ; Stevie Nicks-vocals; Lindsey Buckingham-guitar, vocals; Bob Geary-drums; Gary Hodges-drums; Tom Moncrieff-bass. So we topped the bill to an audience of 7,000- and Buckingham Nicks went out on a much higher note than anyone could have expected.”