A man and his guitar: Lindsey Buckingham comes to Spartanburg 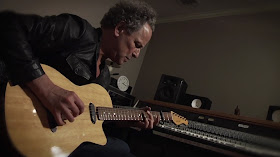 
Even if he weren't responsible for some of Fleetwood Mac's greatest artistic and commercial triumphs, Lindsey Buckingham would demand attention for his instrumental prowess.

He's simply too skilled a guitarist not to be recognized.

Upstate music fans will have the opportunity to get an up-close look at Buckingham's talent when the California native performs Sunday at the Spartanburg Memorial Auditorium.

As a news release for the intimate one-man show puts it, Buckingham “will showcase his distinctive guitar picking style and instantly recognizable voice in his usual awe-inspiring form.”

Buckingham is expected to perform songs from his recent album “Seeds We Sow,” along with favorites from his previous solo albums and a variety of Fleetwood Mac classics.

“As I've grown as an artist, I've gotten more and more in touch with my center, and that center is voice and guitar,” Buckingham said in the news release. “Over time it has become increasingly vital to express more with less; that is my touchstone now, and the embodiment of that philosophy is what will be largely represented in the new show.

“I've been thinking of doing this kind of tour for a while, and am quite excited to be doing something new, something outside my comfort zone.”

Last year, Rolling Stone magazine named Buckingham to its list of “The 100 Greatest Guitarists of All Time” and stated that during Fleetwood Mac's hit-making era, he “transmuted the folk music of his banjo-playing youth into stadium rock.”

As a guitarist, Buckingham uses a finger-picking style that could be compared to that of such country and folk icons as Merle Travis and Doc Watson but which has been adapted to fit his pop and rock inclinations.

In an interview with Guitar World Acoustic Magazine several years ago, Buckingham said, “I've always believed that you play to highlight the song, not to highlight the player. The song is all that matters.”

Buckingham's latest solo album, “Seeds We Sow,” contains an eclectic array of original material along with an impressive acoustic cover of a lesser-known 1967 Rolling Stones gem “She Smiled Sweetly.”

The album tends to shine the spotlight on the percussive nature of Buckingham's playing while staying rooted in the kind of intelligent pop that marked such Fleetwood Mac hits as “Go Your Own Way” and “Tusk.”

Buckingham and his then-girlfriend, Stevie Nicks, joined Fleetwood Mac in 1975, helping propel the legendary group into superstardom. Through his association with Fleetwood Mac, Buckingham was inducted into the Roll and Roll Hall of Fame in 1998.

In 1973, under the name Buckingham Nicks, the aforementioned couple released a critically acclaimed but commercially unsuccessful album that is long out of print and highly coveted by pop fans.